With safety a top priority for travellers post-COVID, new research has revealed which destinations are probably worth taking a cautious approach towards, or even avoiding altogether.

The 2020 Global Terrorism Index (GTI) provides a comprehensive snapshot of the key global trends and patterns in terrorism over the last 50 years, placing a special emphasis on trends over the past decade.

The good news is that deaths from terrorism fell for the fifth consecutive year since peaking in 2014. The number of deaths has now decreased by 59 per cent since 2014 to 13,826, according to the GTI.

Conflict remains the primary driver of terrorism, with over 96 per cent of deaths from terrorism in 2019 occurring in countries already in conflict.

The largest decreases in deaths occurred in Afghanistan and Nigeria. However, they are still the only two countries to have experienced more than 1,000 deaths from terrorism.

The fall in deaths was also reflected in country scores, with 103 improving compared to 35 that deteriorated. This is the highest number of countries to record a year-on-year improvement since the inception of the index.

But, despite the overall fall in the global impact of terrorism, the GTI noted that it remains a significant and serious threat in many countries.

There were 63 countries in 2019 that recorded at least one death from a terrorist attack, and the largest increase in terrorism occurred in Burkina Faso, where deaths rose by 590 per cent. Other countries to deteriorate substantially are Sri Lanka, Mozambique, Mali and Niger.

The GTI uses a number of factors to calculate its score, including the number of incidences, fatalities, injuries and property damage.

The Taliban remained the world’s deadliest terrorist group in 2019; however, terrorist deaths attributed to the group declined by 18 per cent.

ISIL’s strength and influence also continued to decline – for the first time since the group became active, it was responsible for less than a thousand deaths in any one year.

Despite the decrease in activity from ISIL in the Middle East and North Africa, ISIL’s affiliate groups remain active across the world, with 27 countries recording an attack by ISIL or its affiliates.

Sub-Saharan Africa has been hit the hardest, with seven of the 10 countries with the largest increases in terrorism deaths residing in the region. ISIL affiliates are mainly responsible for the increase with 41 per cent of all ISIL-related deaths occurring in sub-Saharan Africa.

For North America, Western Europe and Oceania, the threat of far-right political terrorism has been rising over the past five years.

In these regions, far-right incidents increased by 250 per cent between 2014 and 2019, according to the GTI, and there were 89 deaths attributed to far-right terrorists in 2019.

You can check out each country’s terrorism ranking below: 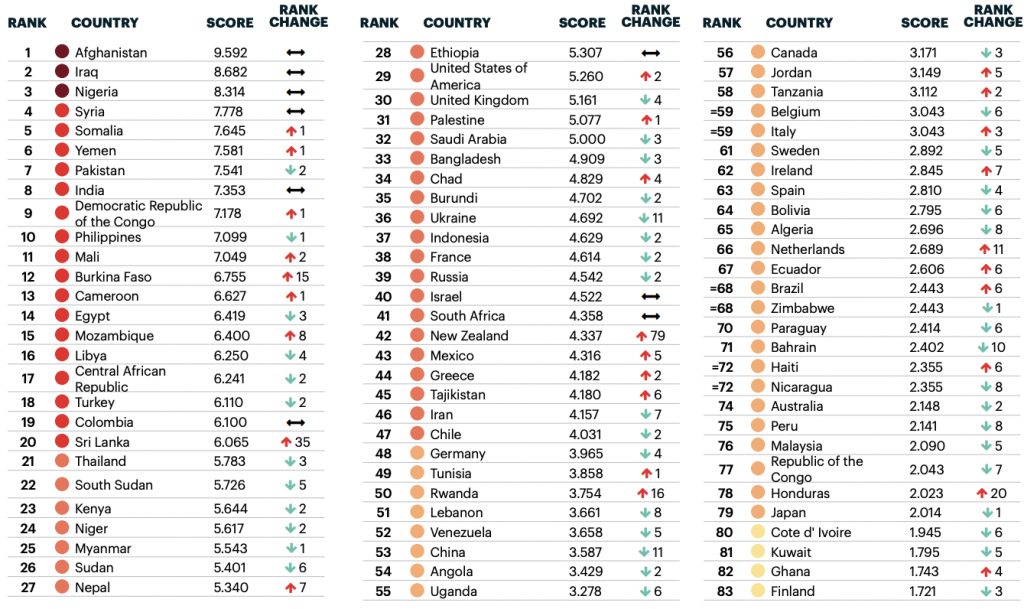 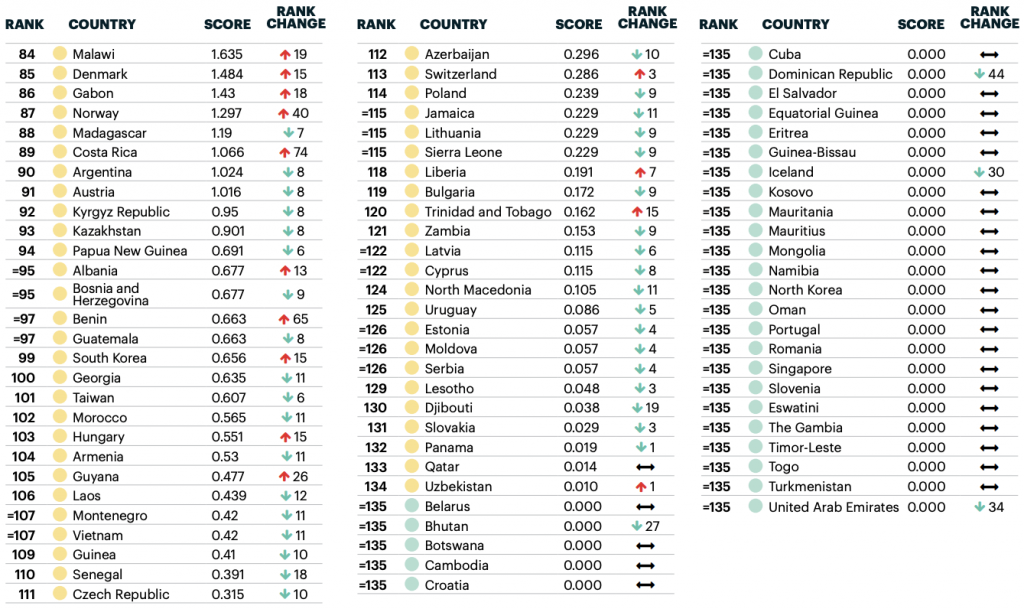 How terrorist organisations have responded to COVID-19

One of the index’s expert contributors, Milo Comerford, said the pandemic has had a profound impact on trends in international terrorism, whose long-term effects are only slowly becoming evident.

“The 2020 Global Terrorism Index does not cover the COVID-19 era. However, provisional data suggests that while the pandemic has reduced overall terrorist activity, in many countries there has been little specific impact,” he said.

“In contexts where terrorism is largely an urban phenomenon, there has been a notable reduction in violence to coincide with global lockdown.

“However, in settings where terrorism is occurring in the context of a broader conflict – including in disputed or border regions – COVID-19 seems to have had relatively little impact on the trajectory of violence.

“But, across a range of phenomena, from access to healthcare to economic inequality, COVID-19 has not just disrupted the status quo, but has served as a catalyst, hyper-charging existing trends.

“Based on initial data, this also appears to have been the case with global terrorism.”

Courtyard by Marriott to fly flag in Brisbane and outer Melbourne

Travel Weekly staff were somewhat relieved by this research, given the low percentage of unconscious travel. Although, we have been known to sleepwalk.

Looks like our days of dealing with raucous holidaying Poms may be coming to an end, sparking despair for local tourism operators and joy for those who enjoy having a quiet one at their local pub.

Jacinda Ardern has emerged from the Beehive to announce New Zealand will soon be flinging its doors open to Aussie tourists, and, apparently, pregnant kiwi journos who have been seeking refuge with the Taliban.