Cruise pause will strip the Aussie economy of $2 billion by year’s end: CLIA

The economic impact of the cruise pause on the Australian economy has reached almost $2 billion, according to the Cruise Lines International Association (CLIA).

A new report commissioned by CLIA and the Australian Cruise Association (ACA) shows about $500 million was lost from March, when cruise ships stopped sailing, to July this year alone.

CLIA’s regional managing director, Joel Katz, said that by the end of December, this will have reached $2 billion given the ongoing pause in operations during the traditional summer peak cruise season.

He said the economy would take a further $3 billion hit if the cruise suspension continued into 2021.

“It is no secret the sector has been devastated by COVID-19, but the impact is also being felt by the many thousands of small businesses, especially in regional communities, that rely on a thriving cruise industry,” Katz said.

“This includes travel agents, fresh food suppliers, tour operators, hotels, bus companies, baggage handlers, Aussie entertainers, and the thousands of other businesses across the country which rely on the cruise industry.” 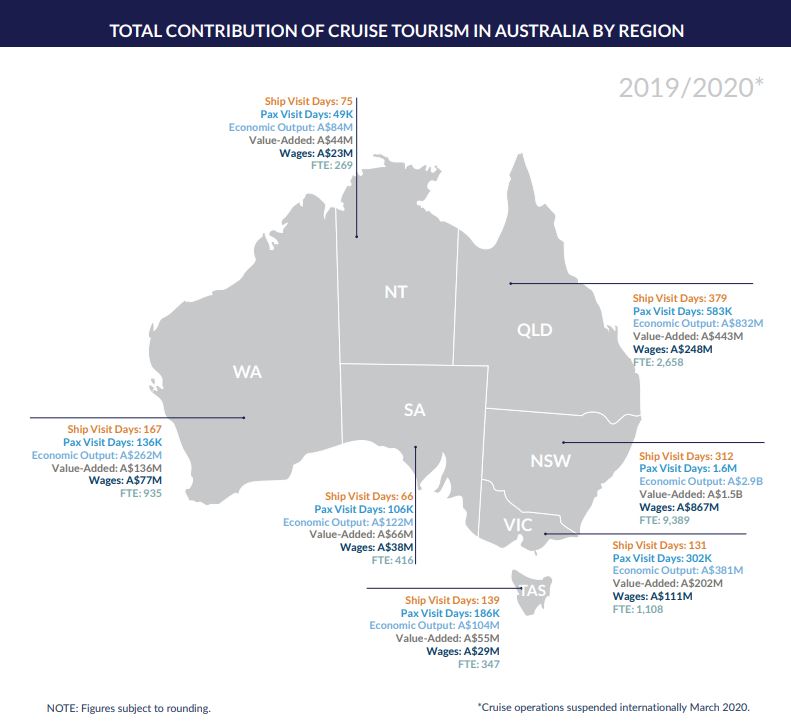 Last week, CLIA presented a set of newly proposed measures to the government seeking to begin a controlled resumption of domestic cruising in Australia with strict health protocols in place.

The measures are meant to support the government’s proposed end date to the cruise ban on 17 December.

“Australia’s success in stemming COVID-19 creates the opportunity for governments to confirm a pathway towards cruising’s revival – one that offers local cruises for locals only, while international borders remain closed, and supports an economic recovery,” Katz said.

The cruise line recruited a famous British journo to be the ship’s godmother, which means she got to wield a cool-looking axe and smash a bottle. Jealous.