From 2022 visitors to Pajinka, the tip of Cape York, the northernmost point of Australia’s mainland, will need to be accompanied by a ranger.

The measures come after increasing vandalism attacks to the iconic location, which has upset the traditional owners of the Tip.

According to ABC News, the site has been effected by a growing number of visitors, as well as acts of vandalism, including reports of human defecation and nudity. The behaviour has left the traditional owners close to closing the site to tourists.

Michael Solomon, chair of Gudang Yadhaykenu Aboriginal Corporation (GYAC), says the behaviour is “disrespecting the traditional owners, even our ancestors. It makes us very upset. It hurts us, makes us sad.”

“I mentioned to close the Tip to tourism because of graffiti and toilet mess in the scrub, but mainly the memorial plaque,” Solomon said.

Corporation director, Nicholas Thompson Wymarra, reported evidence that visitors had sabotaged rock formations, noting piles built from the dislodged rocks. Trees have also been etched with the names and initials of visitors.

“When we walk on our country, we know where all plants and trees, rocks and stones are.”

“For me to go up to the tip, to Pajinka, and to see the actual rock slates missing and the big rock slates that have been knocked off or kicked off, it’s not on” Wymarra said.

Thompson-Wymarra’s son, Jarrah, has also cited nudity as a growing problem after his sister witnessed two visitors naked in a pond – an act which he says was “disheartening”.

“They were shocked… they did not expect that because Pajinka isn’t the place where you can come and do that” Jarrah said.

Gudang Yadhaykenu rangers and a security team have been tasked with protecting Pajinka. Solomon says their objective is to “Make everything balance across for our generation and their generation, for future tourists.”

“We wanna fix that up so their children follow their footprints up to the Tip” Solomon said.

To ensure the protection of Pajinka, the GYAC intend to introduce a fee for visitors, who will be accompanied to the Tip by a ranger. 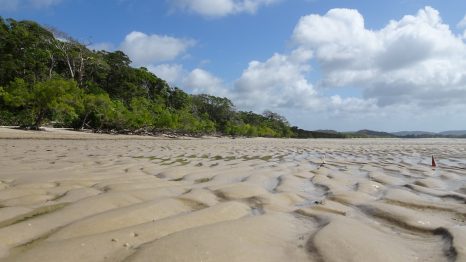 The situation is reminiscent of the closure of the climb at Uluru. Deputy chair of the Queensland Tourism Industry Council and Quandamooka traditional owner, Cameron Costello, believes tourists tend to accept fees for quality eco-cultural and educational tourism experiences. Costello’s own Quandamooka Country is a strong example.

“What this does is actually empower First Nations people to tell their stories and talk about country and explain the connectedness and it helps to educate people.”

“It’s actually providing a really richer, in-depth layer to our tourism in Queensland which is being embraced by the industry,” Costello said.

Costello looks to the 2032 Olympics as another strong opportunity for Indigenous tourism.

Costello says: “As the year of Indigenous tourism comes to a close, we should start embarking on the 10 years of investment in Indigenous tourism, so that when the eyes of the world are upon us in 2032, we are the premier state in Australia and a global hotspot for culturally appropriate tourism.”

Updated travel requirements: here’s everything you need to know

Over the holiday period, Omicron changed the travel game. So here’s what Aussies need to know for domestic and international jaunts.