This week’s Agent Wrap is brought to you by two double-shot espressos and a very long cuddle with the office dog.

Cruise Lines International Association (CLIA) Australasia will expand its successful CLIA LIVE training program in 2020, introducing a two-day event on the Gold Coast in addition to six other cities in Australia and New Zealand.

The event’s debut on the Gold Coast follows the sell-out success of CLIA LIVE in 2019, with more than 650 tickets booked for events held in Perth, Adelaide, Sydney, Auckland, Brisbane and Melbourne.

CLIA LIVE offers a packed seminar program in which representatives from the world’s ocean, river and expedition cruise lines gather in the one forum to share product knowledge and insight. The events suit both new-to-cruise travel agents as well as more experienced sellers looking to update on the latest cruise developments.

CLIA LIVE 2020 is now available to book in the following cities:

Tickets are available to CLIA members only and cost A$50+GST or NZ$55 per day, with the option to attend one or both days. CLIA will award 30 accreditation points per day to all attendees. 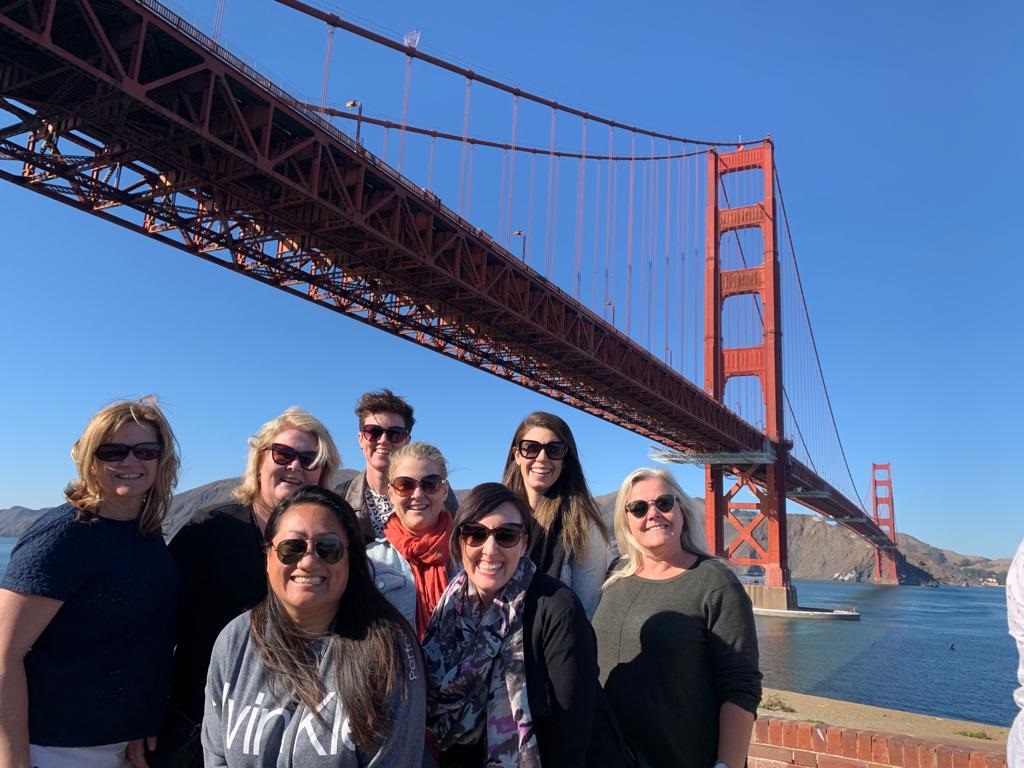 Experiences included a helicopter ride over San Francisco Bay and under the Golden Gate Bridge and Halloween’s Day of the Dead parade.

The Advisers then hung-up their witches’ outfits and headed to the open air of Sonoma Country 2 hours from San Francisco Bay. Known for its award-winning wineries, nature reserves and picturesque communities, the advisers sampled world-famous wines, kayaking and recharging spa treatments before they headed home, armed with the ultimate insights into California’s finest on offer.

Travellers Choice is set to expand its suite of innovative support services this weekend when more than 250 members and suppliers gather in Adelaide for the award-winning network’s annual conference.

The three-day event – taking place at the Adelaide Convention Centre from 15 November – is themed ‘Our People, Our Future’, with a broad focus on driving business growth through professional and personal development.

Travellers Choice Conference attendees will also hear from a selection of speakers, including entrepreneur Leanne Faulkner, the founder of celebrated Australian skincare business Billie Goat Soap, who is recognised as a leading advocate for small business well-being.

In addition, the event will feature the Company’s Annual General Meeting and Members’ Forum, a Preferred Supplier Exhibition and the presentation of the group’s 2019 Gold, Silver and Bronze Choice Awards. 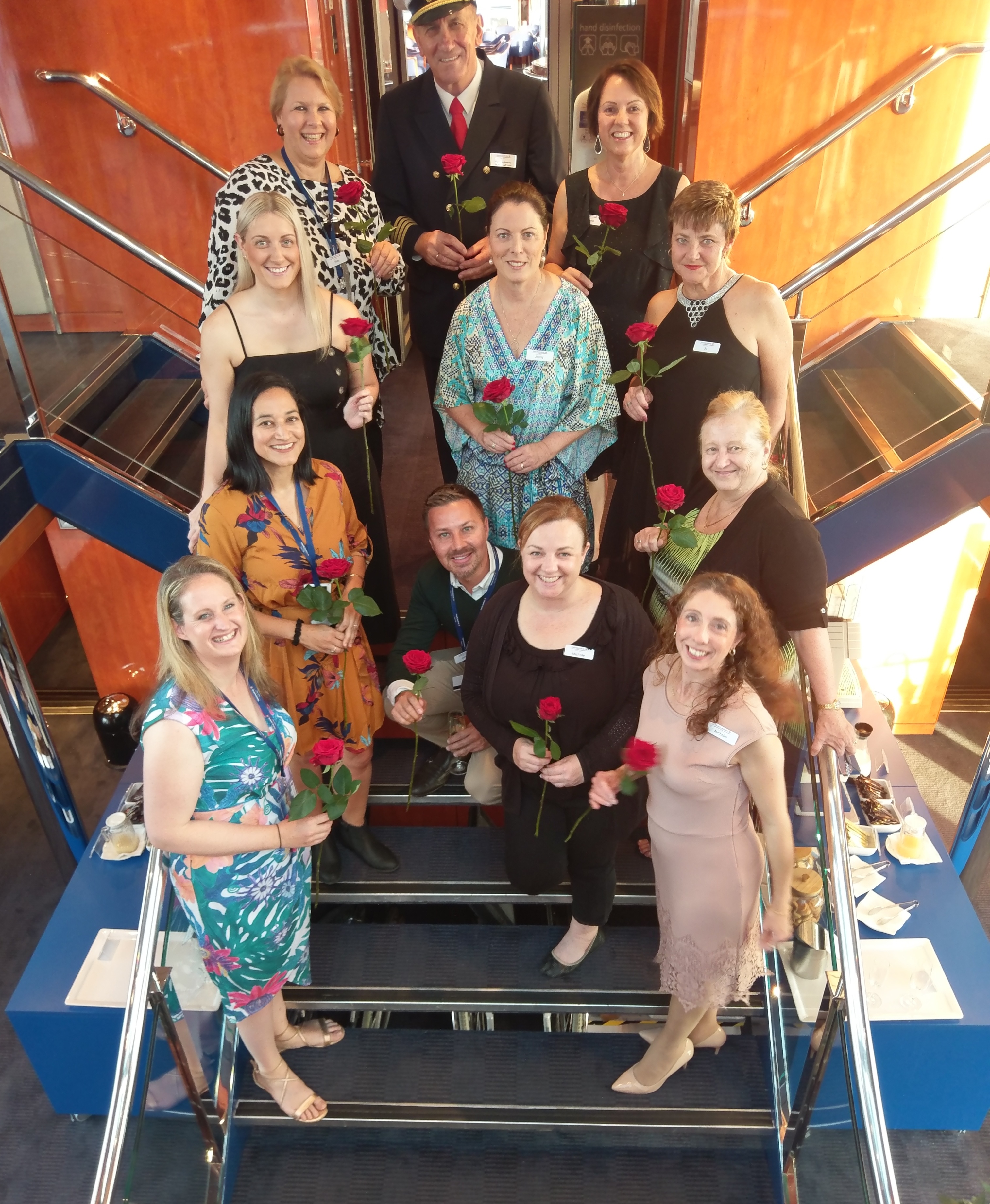 If you hadn’t spotted Lufthansa’s Jeffrey James hiding in the middle of this rose-laden group of ladies, you might be mistaken in thinking this is a scene from the latest series of ‘The Bachelor’.

It’s not. It’s actually a group of MTA – Mobile Travel Agents Advisors and their Travelmarvel and Lufthansa hosts pictured on board the Travelmarvel Diamond with the vessel’s master, Captain Punisa Grbovic, on a recent Travelmarvel European Gems River Cruise.

‘Oh for the love of Australia’: industry steps up to combat drought

As Australia battles through the worst drought in living memory, bales of hay have risen to nearly five times pre-drought prices.

The ‘Oh for the love of Australia’ campaign has been launched across the entire Australian travel Industry to encourage support for farmers during this trying time.

The campaign is coordinated by Bev Walters, a retail agent for Travel Bird, and is focusing on providing two areas of support for Regional and Rural Australia.

Walters is currently seeking donations of prizes from suppliers in the travel industry in order to encourage people to donate directly to RURAL AID.

If you wish to participate (and we certainly hope you do), would you kindly

a) Complete this form online

b) Forward a copy of your logo in high-res to bevwalters@travelbird.net.au.

Secondly, a Facebook page has been created to allow Australians to send messages of support to regional and rural Australia.

Vietnam reveals its adventurous side for Personal Travel Managers 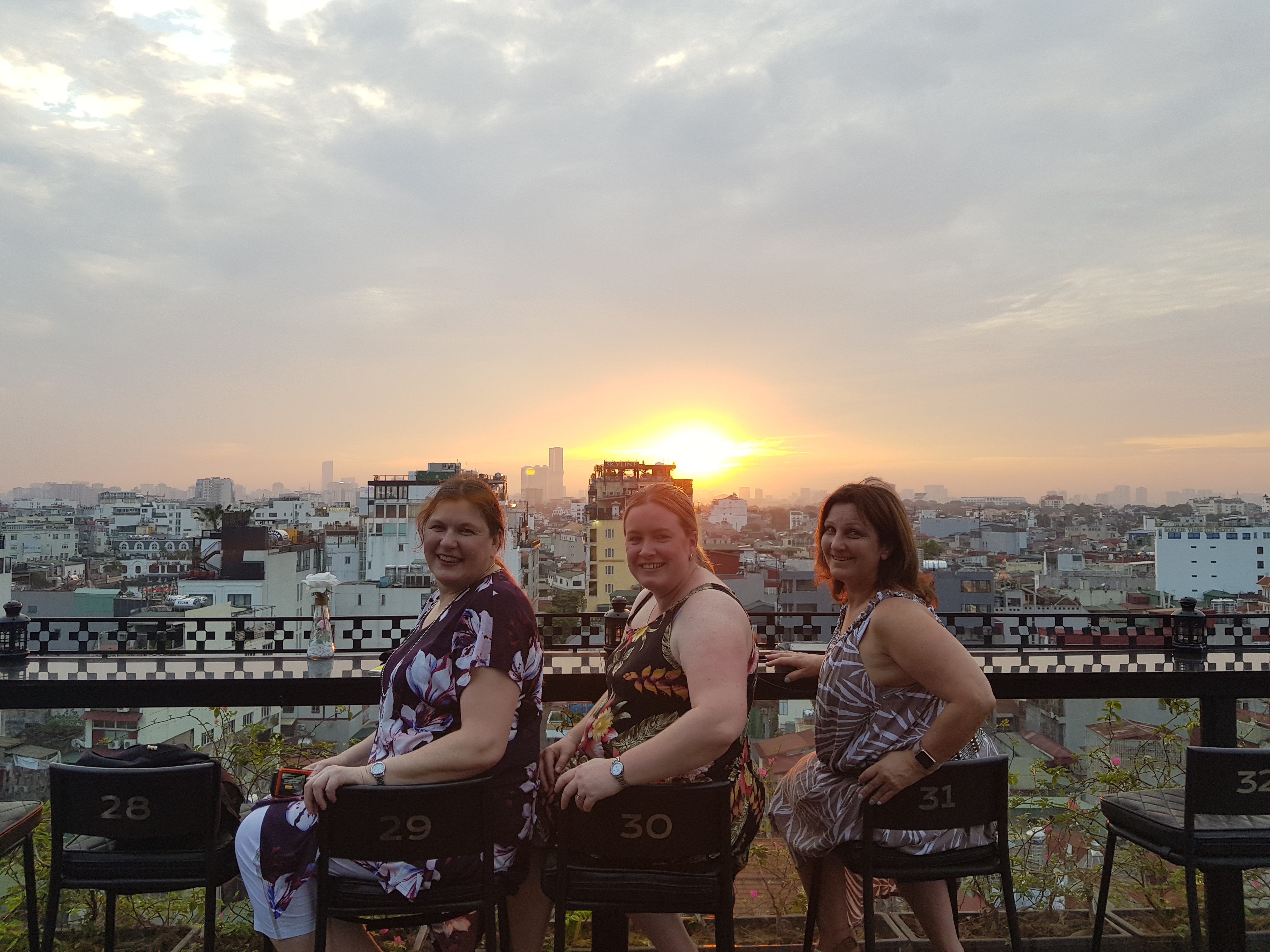 400-million-year-old karst mountains, vast cave systems and spectacular underground rivers: these are the features for which Vietnam’s Phong Nha National Park are renowned. One of central Vietnam’s most unique and spectacular landscapes, the park achieved UNESCO World Heritage status in 2003, and was among the most memorable locations visited by seven of TravelManagers’ personal travel managers (PTMs) on a recent famil hosted by Wide Eyed Tours.

The PTMs were part of a group of 12 travel advisors who were invited to take part in the week-long famil, which was designed to showcase the attractions and activities on offer in northern and central Vietnam, taking in Phong Nha National Park as well as the cities of Hanoi, Hue and Hoi An. 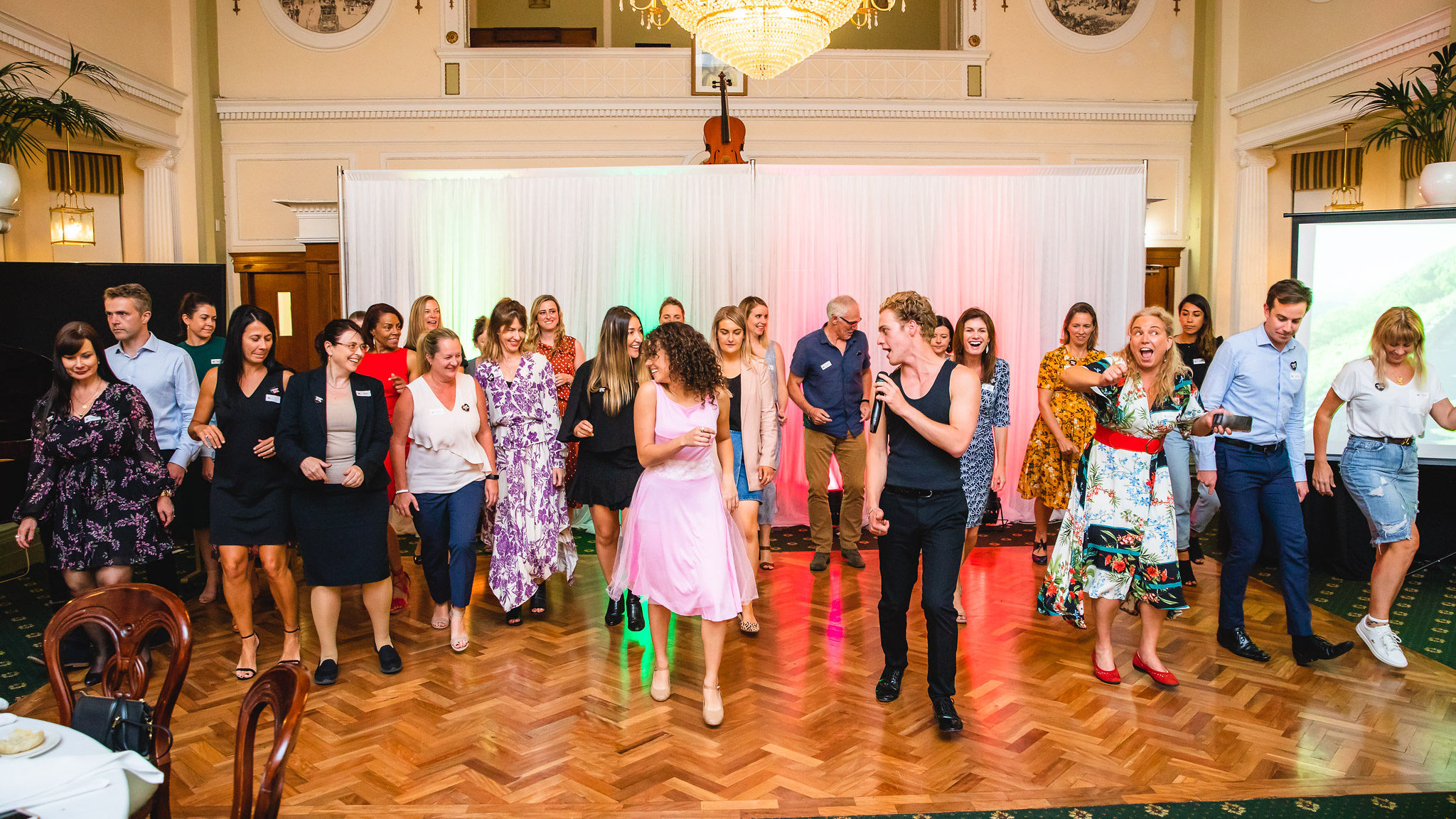 Travel industry guests had the time of their life last week in Sydney at Virginia Tourism Corporation’s Dirty Dancing Dinner.

Virginia Tourism President and CEO of Virginia Tourism, Rita McClenny, was guest of honour, along with her team Chrisiti Braginton – international media relations manager, and Heidi Johannesen – global marketing director, Virginia Tourism Corporation, all of whom were being hosted by Gate 7 in Australia for a week of trade and media calls.

A group of nine travel agents just returned from a fascinating ten-day famil to Chile guided by four Bunnik staff.

Beginning in Chile’s capital, cosmopolitan Santiago – the group got a true bird’s eye vista of the city and surrounds from the Sky Costanera observatory, South America’s tallest building. From there it was off to a traditional Atacameno farm to gain an insight into daily life in this vast desert setting before enjoying sunset drinks at Moon Valley.

The tour provided the agents ongoing opportunities to experience the country’s diverse culture, food and landscapes from the El Tatio Geysers, the stunning Lake district at Temuco, the extensive lava tunnels created by the still active Villarica Volcano (also known as the “Devil’s House”) through to the contrasting lush surrounds of the Huilo Huilo Nature Reserve where the group stayed in the renowned Nothofagus Hotel and Spa – a “luxury treehouse” in the middle of the biosphere.

Sell your way to the USA incentive 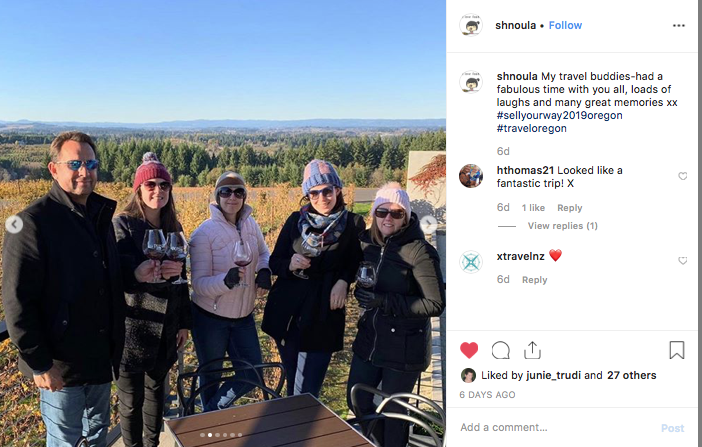 The Sell Your Way to the USA 2019 incentive in conjunction with American Airlines and the destination partners, Travel Oregon, Discover New England, Destination DC, Travel Nevada and Visit Anchorage was a huge success this year.

The incentive was launched at the February 2019 Visit USA shows across Australia & New Zealand. Winners were announced at the American Airlines 4th  of July celebrations in Sydney, Australia.

After more than 310 agents across both sides of the Tasman registered for the incentive and sold American Airlines tickets to key destinations, 15 agents (12 from AU and 3 from NZ) got to experience one of the 5 states on offer with flights to the destination supported by American Airlines in their Premium Economy cabin.

Points were allocated for all return flights ticketed to North America with American Airlines, as well as any land content to the 5 partners, Oregon, Nevada, New England, Anchorage or Washington, DC.  Extra points were given for tickets that included Las Vegas, Portland, Boston, Anchorage and Washington, DC

Agents were encouraged to showcase and document their Famil programs on social media as such the following hashtags were created, so we were able to follow along on each of their journeys. 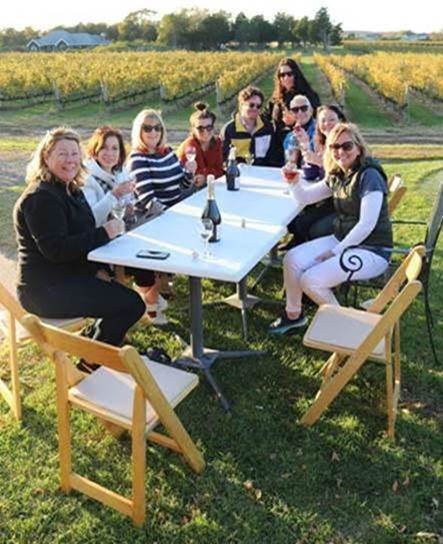 I Love New York Australia has given six lucky Australian travel agents a taster of the best of upstate New York with its incentive famil last month.

Hosted over the course of a week and to the striking backdrop of New York State’s famous fall foliage, the agents explored six regions beyond Manhattan’s bright lights. Starting just an hour out of New York City, in Long Island, the agents enjoyed the full bounty of fall’s harvest with pumpkin picking, before exploring a selection of the Hamptons’ most iconic mansions; a peek at the lifestyles of the rich and the famous. In Hudson Valley, the agents delved into the arts and history of the region and experienced the fall colours and Hudson River via a unique view – a flight in an historic aircraft.

The Catskills region was the next stop, where the agents savoured a true American outdoors experience, staying overnight in cabins and making their own s’mores. In the Finger Lakes, the agents explored world-class wineries while taking in sweeping views of the fall colours over the region’s lakes. Buffalo, the group’s second to last stop, served up incredible architecture and art, while at Niagara Falls, the last stop on the famil, the agents experienced the roar of the world’s second-largest waterfall and the famed Maid of the Mist.

South African Airways cancels almost all flights due to strikes