REVEALED: These are the world’s most dangerous selfie hotspots

Nothing says “I’m on holiday” like a good old-fashioned selfie at a famous landmark.

But, there’s a dark side to travel selfies: thousands have died taking selfies in dangerous locations in the last few years.

So, what should you avoid?

Gambling website TopRatedCasinos has crunched the numbers to find out which are the most dangerous selfie hotspots around the world.

To do this, it analysed news articles within the last two decades which reported incidents (ranging from minor injury to death) at some of the biggest tourist hotspots, to compile a list of the most dangerous selfie spots around the globe.

This was followed by gathering Instagram hashtags for each location, to reveal which is the most at risk of danger.

With a whopping 4,869,100 posts on Instagram, Yosemite National Park is the most popular dangerous selfie hotspot.

It’s estimated that five million people visit here each year and over a 1,000 have died. From slipping to their death to selfie attempts gone wrong, this one you need to take extra caution with.

Following in second place is another USA attraction: the Grand Canyon. The Arizonan national park boasts 4,267,800 Instagram posts and is estimated to be the cause of 12 deaths each year.

In third place is Snowdon, located in Wales, with 1,576,589 posts. With the most recent death reported in September, visitors need to be careful of their footing as that seems to be the main cause of injury and death.

Also representing Europe is the Plitvice Lakes National Park which can be found in Croatia.

With 16 lakes lying within it that are connected by a series of waterfalls, it’s no surprise there are 986,915 posts from tourists flocking to this hotspot.

However, in 2016 mountain rescuers pleaded with tourists to stop taking “stupid and dangerous selfies” after completing 1,200 rescue operations and with many unfortunately falling to their deaths.

Completing the top 10 most dangerous hotspots are:

Trolltunga finds itself in 11th place among the list of dangerous selfie hotspots with 212,988 posts. Tourists have been said to flirt with death when visiting in a quest for the perfect selfie.

With many climbers dangling from Trolltunga for the perfect shot, intense weather conditions and many not equipped with the right gear, it has a lot of potentials to go wrong.

Mount Everest and Lulworth Cove find themselves in 12th and 13th place with 201,878 and 160,087 Instagram posts respectively.  Both of these popular attractions have made headlines multiple times after people have injured themselves after taking on daredevil worthy challenges.

Despite its beautiful views, that wasn’t enough to stop Yungas Road – also known as “Death Road” – making the list in 17th spot (56,474).

It holds the title of the most dangerous road in the world and rightly so as its narrow and winding track is often overloaded with trucks and overcrowded buses, accompanied with slick roads thanks to the rainforest climate bringing heavy rain and fog. 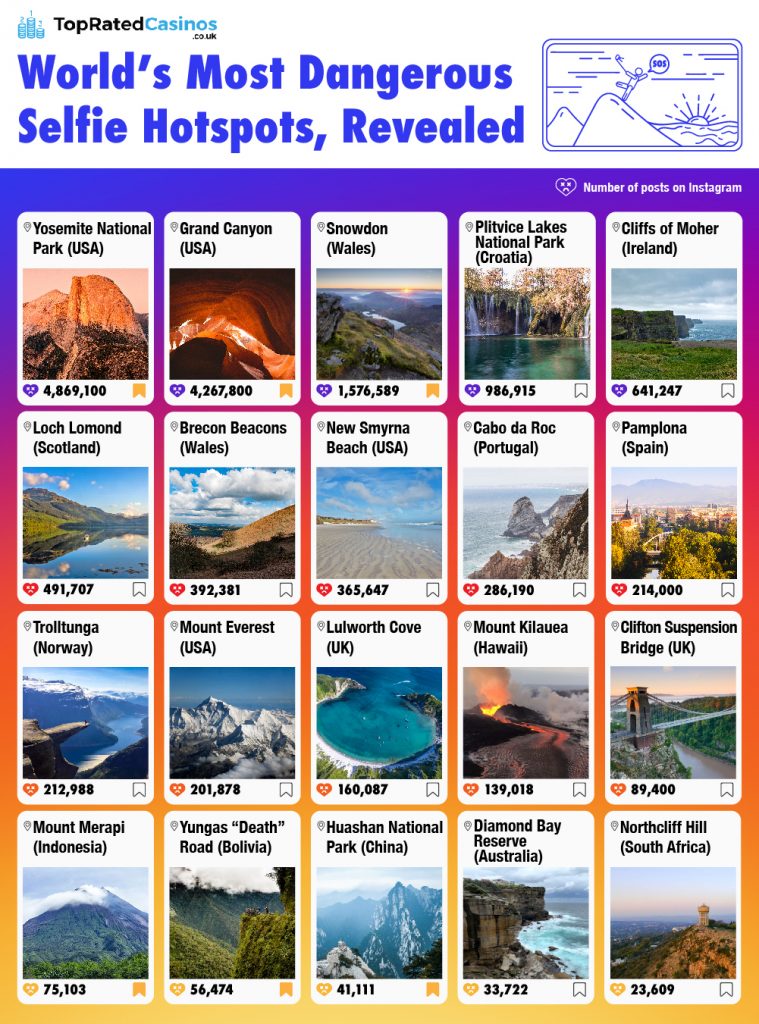 Woman falls to her death at the Grampians, prompting urgent ‘selfie’ warning

A woman has tragically fallen to her death in the Grampians after climbing over a safety barrier at one of the region’s popular lookouts.