Melbourne Airport has shown its support for Victoria’s vaccination push by launching a competition which only those who have had the jab can enter.

Melbourne Airport is incentivising Victorians to be fully vaccinated against COVID-19 by giving six holidaymakers $10,000 in cash to spend on travel.

The aim is to reward people already vaccinated and incentivising others when more vaccine supply is available.

The vaccination competition will run until the end of the year, and each month one lucky winner will be selected.

To enter, travellers must submit proof of vaccination, coupled with a passionate explanation about why and where they would like to fly.

People can either send in written submissions of 50 words or less about why they want to travel, or send a video submission that runs for no longer than 60 seconds.

Winners will also benefit from VIP extras such as valet parking as part of the prize. Every valid entry will also receive a code to redeem savings on parking at Melbourne Airport.

The travel vouchers would be valid for 18 months, giving Melburnians more flexibility when they fly. The airport will announce six winners, in total, on its social media pages.

The incentive program was launched via The Herald Sun with a full-page ad (see below). Within 10 minutes of the competition launching, 100 people had applied, and 3AW’s Ross and Russ have plugged the campaign on their radio show. 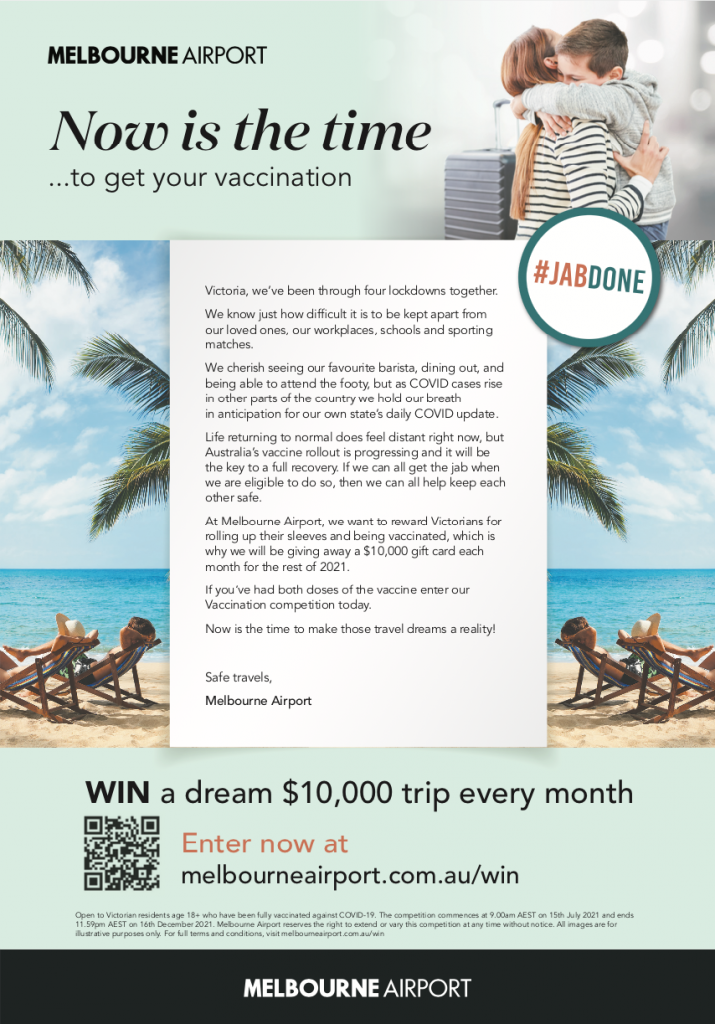 Additional marketing is live on the airport’s terminal screens, run by oOh! media. The full campaign will run across print, digital, outdoor and social media for the next six months.

The airport will also introduce a parking lockdown price guarantee later this month, aiming to give drivers added peace of mind around border closures and lockdowns.

Melbourne Airport CEO Lyell Strambi said: “When it comes to flying Victorians have been impacted severely, which is why we decided to launch our own incentive program to get more people dreaming about their next holiday in the safest way possible.

“Vaccination is going play a major role in unlocking air travel, especially overseas markets, so we’re adding our weight to the governments’ vaccine drive in an effort to increase inoculations.

“Almost 30 per cent of Victorians have had their first dose and hopefully we see that number rise significantly over the coming months.”

“It was a difficult time”: Virgin responds to toxic workplace claims as group medical officer departs

Another high-level departure at Virgin has raised further questions about its culture. We’re no experts, but may we recommend keeping employees onside with a fully stocked cupboard of Tim Tams?

Australia’s ‘golden triangle’ airports are expecting today to be their busiest day since the global pandemic began, so be sure to pack your extra-large book of sudoku puzzles.