Greg Lynn, the JetStar pilot who was charged last week with the murder of campers Russell Hill and Carol Clay, is to remain in custody at Melbourne Assessment Prison until he reappears at court again in May 2022.

According to The Age, Lynn sat unmoving during his court appearance on Friday morning, hours after being charged for the alleged killing of the missing couple.

The 55-year-old pilot appeared at Sale Magistrates Court via video link from the nearby regional police station.

Lynn’s family released a statement on Friday afternoon through their lawyers, Chris McLennan & Co, saying the revelations had been distressing and left them “completely traumatised.” 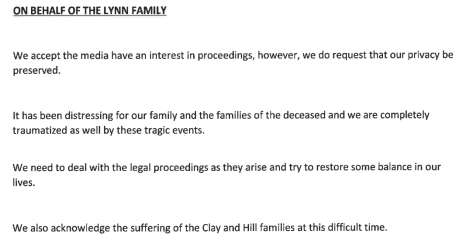 “We need to deal with the legal proceedings as they arise and try to restore some balance in our lives,” the statement read.

“We also acknowledge the suffering of the Clay and Hill families at this difficult time.”

Long-time friend of Mr. Hill, Rob Ashlin, told 10 News First Melbourne he was relieved someone had been arrested in relation to the alleged murder’s.

“It’s been a long road for the last 20 months, very hard… I just hope that the police can continue their great work, bring the bodies home so the family can have closure.”

“I’m pleased that somebody has been brought forward and hopefully justice will be done. We all have a right to be here. We shouldn’t walk around the bush or anywhere in fear of something happening,” Ashlin said.

Victoria police assistant commissioner, Bob Hill, held a press conference last Thursday night where he said the charges could provide some closure to the families of Hill and Clay.

Commissioner Hill also commended the efforts of the police, describing their efforts as extraordinary. The Victoria Police expect to spend the coming days searching for the remains of the missing couple.

Lynn’s lawyer, Chris McLennan, told the court he was aware the investigation was “fairly substantial,” understanding it may take longer than usual to receive the detective’s brief of evidence.

McLennan made no application for bail on behalf of Lynn.

Hill and Clay, who were aged 74 and 73 respectively, have been missing since March 2020 when the two went for a camping trip in the Wonnangatta Valley.

Despite combing the area for 20 months, police are yet to find the pair.

Campers found Russell’s vehicle with signs of minor fire damage at their campsite, which was completely destroyed by fire, near Dry River Creek Track in the Wonnangatta Valley on 21 March.