These are the best passports of the decade

A lot has happened in the past decade, and the effects on the travel industry have been profound.

We’ve seen the effects of terror attacks in Europe, countless natural disasters, the Trump Slump and Brexit, just to name a few.

When it comes to global mobility, the 2010s left a lasting mark.

According to research from the Passport Index, the rise of positive democracy has seen some unlikely players rise to the top of the list in terms of passport power.

Over the past 10 years, the Passport Index identified a common trend in island nations climbing slowly higher in the ranks as the fastest-growing passports while African nations swiftly escaping the lowest-ranking bottom, and many countries within the European Union remaining stagnant and comfortable at the top.

Unsurprisingly Denmark, Finland, France, Germany, Italy, Luxembourg, Netherlands, Sweden and the UK have been amongst the top five most powerful passports ranking for the last decade. Over the years, others including Japan and Singapore have joined the pact, however, this list of European Union nations, are the only ones who have remained strong, consistent, and comfortable at the top.

While in 2010 the UK dominated the highest-ranking list, by 2019 it has dropped down to 5th place, sharing its new rank with Canada and New Zealand as well as five other European nations. After Brexit, the UK will either see its past glory return, or it may fall even lower.

One notable absence is the USA. Under Trump’s Administration, the American passport has received little to no attention.

Strengthening the US passport should most certainly have qualified in Trump’s promise to “Make America Great Again” — but increasing the freedom of global mobility for its citizens has been largely ignored under his administration.

But the greatest passports, based on visa-waivers, was dominated by a group of unlikely underdogs, proving the power of breaking down walls and borders, with Vanuatu in 10th place, showing a remarkable 70 per cent increase in its passport power after gaining 53 visa waivers.

Another Southeast Asian island nation, Timor Leste comes next in 9th place with an impressive +55 visa waivers, jumping up from 86th position on the global rankings to 48th place.

Closely behind, and once again in the Pacific, Micronesia takes 8th place with a 116 Mobility Score (MS) after gaining 57 visa waivers. Palau and the Marshall Islands share the 7th position, both scoring a remarkable +58 visa waivers in the past ten years.

Championing in 6th place with a nearly 110 per cent increase in ranking after gaining 63 visa waivers, is another ambitious duo, Moldova and Georgia — two former Soviet republics in Eastern Europe. Proudly making it to the Top 5 Greatest passports of this decade with +64 visa waivers is Bosnia and Herzegovina, up 119 per cent from 2010 to 2019, with a 118 MS.

With an additional 65 visa-free and visa-on-arrival destinations for its citizens, Albania takes 4th place, increasing 131 per cent from its original score back in 2010.

Ukraine’s passport takes 3rd place, jumping +69 and scoring a grand 141 MS in 2019. Despite political turmoil in the last few months, Taiwan, the Republic of China (ROC) exceptionally displays a 143 per cent increase in ranking, taking 2nd place with +79 visa waivers between 2010 and 2019!

And stealing the spotlight in 1st place with an outstanding 161 per cent increase in its passport power between 2010 and 2019, is the Unicorn of the Decade: the United Arab Emirates with a +110 jump in visa waivers. 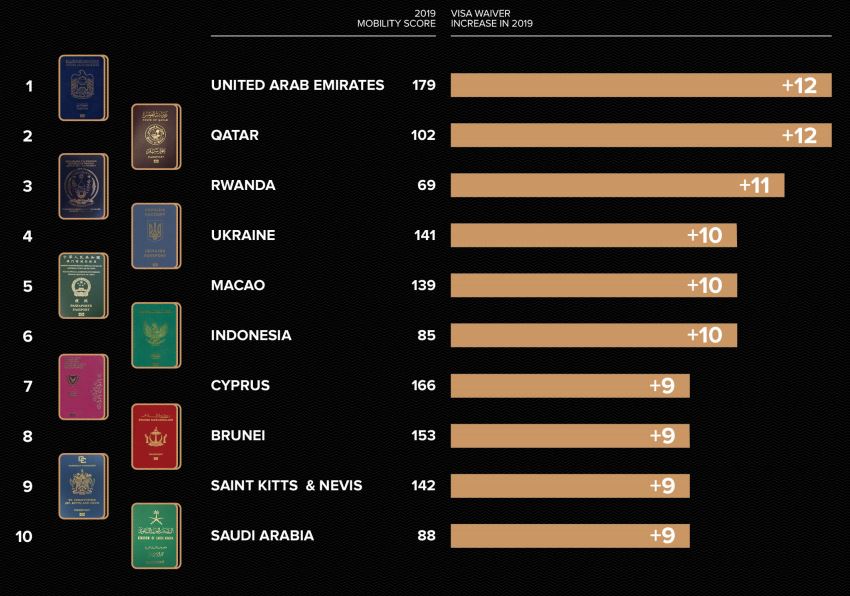 To see the full break down, go here.

World’s most powerful passports are travelling the least in 2022

Passport holders with the greatest global access are currently the most restricted and reluctant to enjoy their travel freedom, according to the latest results from the Henley Passport Index.

If you’re ever looking for a nice opportunity to stand around for a few hours and get annoyed with bureaucracy, the passport office is the place for you!