Qantas has chosen Darwin to temporarily replace Perth as its new gateway to London when it resumes international flights next month.

The national carrier confirmed it would reroute its flagship service between Australia and London to either Darwin or Singapore last month, standing by its threat to move the service away from Western Australia in response to the state’s reluctance to open its borders in line with the federal government’s reopening plan.

On Friday, Qantas revealed it had managed to reach an agreement with the Northern Territory government and Darwin Airport to temporarily use the destination as a stop-over for flights from Melbourne and Sydney to the UK.

The Darwin hub arrangement will be in place in time for the airline’s new early resumption date on 14 November until at least April 2022 when London flights are scheduled to operate via Perth again.

The Sydney-Darwin-London route will begin on 14 November, while the Melbourne-Darwin-London route is currently scheduled to begin on 18 December 2021, but Qantas has hinted it could start earlier depending on discussions with the Victorian government on shorter quarantine arrangements for returning travellers.

“The Kangaroo Route is one of the most iconic on the Qantas international network and we are delighted that Darwin will play a vital role in Australia’s post-pandemic reopening to the world,” said Qantas Group CEO Alan Joyce.

“Qantas has been flying repatriation services from London to Darwin as part of the airline’s efforts to help bring Australians home over the past 12 months, so our pilots already have extensive experience operating this particular route.”

“The convenience of this route will mean tapping into brand-new markets for tourism and business. It will also open up new opportunities for developing the aviation skills sector here in the Northern Territory.”

QF1 will take off from 14 November 2021, departing Sydney five times a week at 6:30pm, and land in Darwin at 9:25pm for a brief refuelling stop ahead of the 13,800-kilometre, 17-hour and 20-minute direct journey to London’s Heathrow airport.

Darwin was the launchpad for Qantas’ first international flight in 1935 from Brisbane to Singapore via Darwin.

The NT capital was also part of the original 1947 Kangaroo Route between London and Sydney, which took four days and flew from Sydney to Darwin and then onwards to Singapore, Calcutta, Karachi, Bahrain, Cairo and Castel Benito before landing in London.

Qantas has also put together a handy fact sheet to let passengers know what they can expect on international flights, including vaccination certificates, check-in times, passenger forms and quarantine requirements.

The airline has made vaccination compulsory for its international flights and passengers will need to be fully vaccinated with a TGA-approved or recognised vaccine, as well as return a negative PCR COVID test at least 48 hours prior to departure and home quarantine for seven days on arrival into NSW. 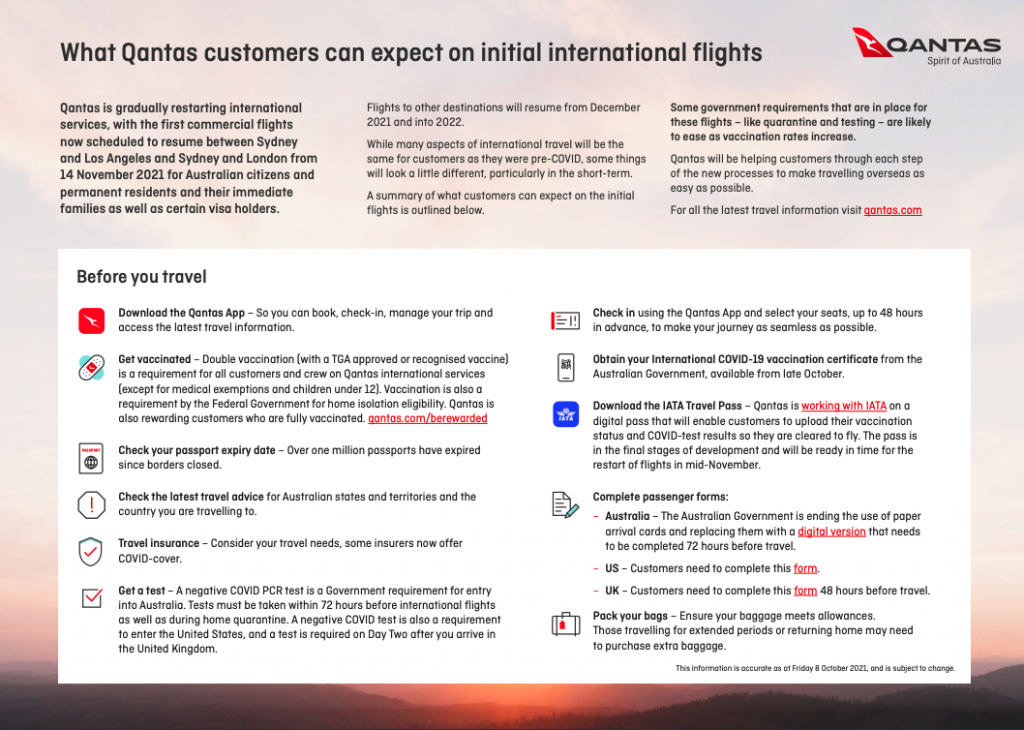 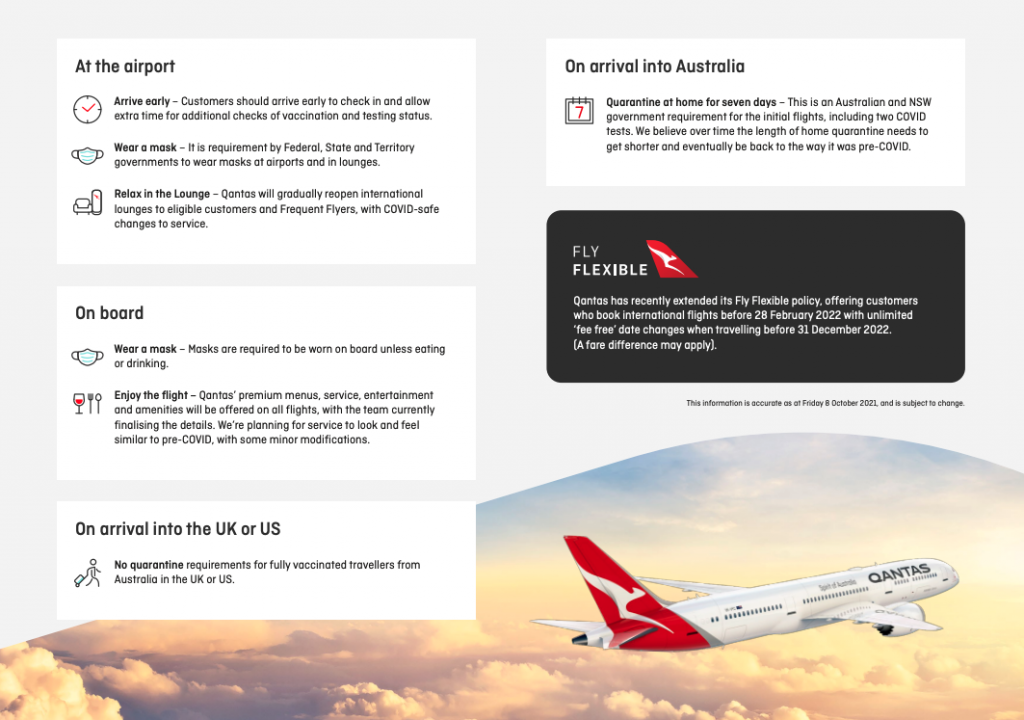 Fiji to welcome back international travellers, with first flight leaving Sydney on 1 December