After much speculation and deliberation, Virgin Australia has announced it has entered voluntary administration after failing to strike a deal with the federal government.

Virgin has appointed Deloitte to help restructure its $5 billion debt pile and recapitalise the business, after hiring Houlihan Lokey earlier this month to advise on how this process should play out.

The company noted that its frequent flyer program, Velocity, is not in administration.

Virgin said it will continue to operate its scheduled international and domestic flights that are helping to transport essential workers, maintain important freight corridors and return Australians home.

Deloitte’s Vaughan Strawbridge said the intention of the administrators is to bring the company out of administration as soon as possible.

“We are committed to working with Paul [Scurrah] and the Virgin Australia team, and are progressing well on some immediate steps,” he said.

“We have recommended a process of seeking interest from parties for participation in the recapitalisation of the business and its future, and there have been several expressions of interest so far.”

Virgin Australia CEO Paul Scurrah said the decision to enter voluntary administration was about securing the company’s future and emerging on the other side of the COVID-19 crisis.

“In 20 years, the Virgin Australia Group has earned its place as part of the fabric of Australia’s tourism industry,” he said.

“We employ more than 10,000 people and a further 6,000 indirectly, fly to 41 destinations including major cities and regional communities, have more than 10 million members of our Velocity loyalty program, and contribute around $11 billion to the Australian economy every year.

“Australia needs a second airline and we are determined to keep flying. Virgin Australia will play a pivotal role in getting the Australian economy back on its feet after the COVID-19 pandemic by ensuring the country has access to competitive and high-quality air travel.”

Virgin confirmed to workers that their entitlements such as leave will be preserved, and that they will continue to receive the JobKeeper payment while the company is in voluntary administration.

The government faces a potential entitlements and redundancy bill of $800 million if it allows Virgin to collapse. 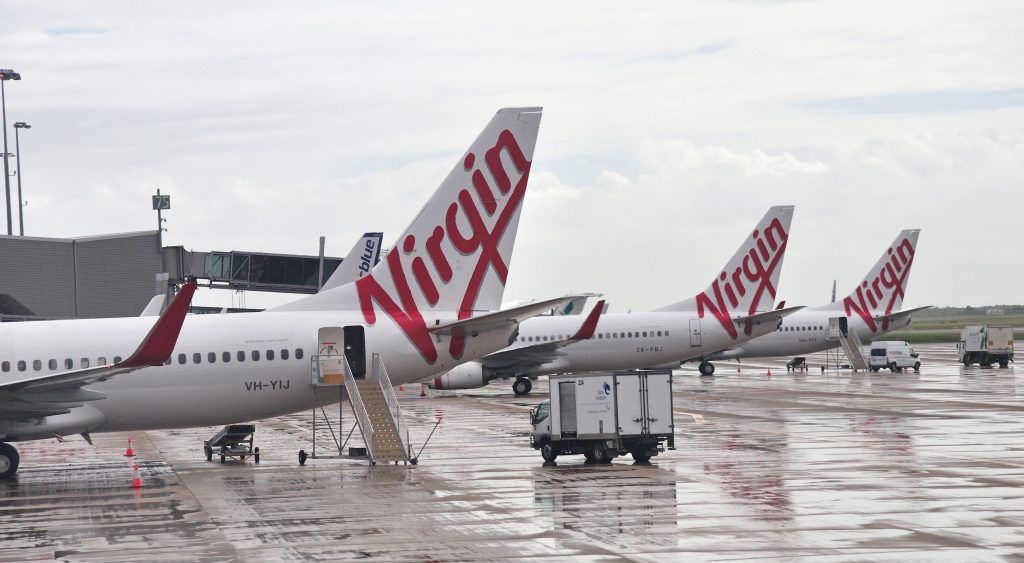 The struggling airline had been in a trading halt on the ASX since last Tuesday, having extended the pause on Thursday to buy some more time for either the government or outside investors to come to the rescue.

Virgin had originally proposed a $1.4 billion bailout from the government to help survive the impact of COVID-19.

However, given $165 million worth of funding had just been allocated to help keep Virgin and Qantas flying domestically, on top of the $715 million relief package for Aussie airlines announced last month, as well as a $300 million lifeline for the regional aviation sector, it seemed unlikely that the government would offer specific financial support to Virgin.

Adding to this doubt were the comments of Prime Minister Scott Morrison, Deputy Prime Minister Michael McCormack and Treasurer Josh Frydenberg to the media about the government’s desire for Virgin to be saved by private investors.

Two companies that have continually been speculated as potentially lining up a play for the airline were Bain Capital and BGH Capital.

It’s major shareholders – Etihad Airways, Singapore Airlines, Nanshan Group and HNA Group – passed up the opportunity to provide an equity injection, while Richard Branson’s Virgin Group, which owns just over 10 per cent of Virgin Australia, has remained silent throughout.

The Queensland government unsuccessfully attempted to bait the federal government into providing support for Virgin over the weekend with a conditional $200 million lifeline, and blasted the NSW government over news that it would provide financial assistance if the airline relocated its headquarters to Sydney.

There has been growing speculation that Virgin’s future may only be a domestic one, and that Tigerair will be no more.

The carrier suspended all international flying in March due to the impact of the coronavirus outbreak on travel, and announced it would temporarily stand down approximately 80 per cent of the company’s 10,000-strong workforce until at least the end of May.

Earlier this month, the carrier shrunk its domestic capacity to a daily service between Melbourne and Sydney.

Paul Scurrah was brought in to replace John Borghetti as CEO of Virgin in March last year, and had already enacted a number of cost-saving and strategic measures designed to drag the company out of its loss-making ways.

These included the cutting of 750 jobs across the group, major fleet and network reductions and its acquisition of Velocity Frequent Flyer.