It’s been a big week for the Kangaroo Carrier, with not only the announcement of a truckload of New Zealand flights but also a whopping sustainable aviation deal AND the return of first-class!

Following confirmation that New Zealand will reopen for quarantine free travel to all Australian travellers next month, just in time for the Easter holidays, Qantas and Jetstar will add up to 30 return flights per week across the Tasman on five routes.

The flights, which will kick off on 13 April, are a significant increase on the two return flights a week currently being operated.

Qantas will fly daily from Brisbane, Melbourne and Sydney to Auckland and Sydney to Christchurch with a mix of its Boeing 737s and wide-body Airbus A330 aircraft

Jetstar will operate three weekly flights from the Gold Coast to Auckland using its Airbus A320 aircraft.

The airlines are expected to increase flights during May and June and resume flights from Australia to Queenstown and Wellington.

Prior to COVID, Qantas and Jetstar operated more than 170 return services a week between Australia and New Zealand.

Earlier this week, Qantas announced it would expand its use of sustainable aviation fuel (SAF) by tapping into supplies in California to help reduce carbon emissions on its flights from LA and San Francisco to Australia.

SAF produces up to 80 per cent less emissions than traditional jet kerosene and is compatible with existing aircraft. Airlines around the world are increasing their use of SAF, with demand outstripping supply in most jurisdictions.

US biofuels company Aemetis will supply almost 20 million litres of blended SAF each year for Qantas flights, starting in 2025.

This is Qantas’ second major offshore purchase of SAF with flights from London using a blend of sustainable fuel since the start of this year.

“Climate change is front of mind for Qantas, our customers, employees and investors, and it is a key focus for us as we move through our recovery from the pandemic,” Alan Joyce, Qantas Group CEO, said.

“Operating our aircraft with sustainable aviation fuel is the single biggest thing we can do to directly reduce our emissions.

“We’re actively looking to source sustainable aviation fuel for our operations, and the deal we’re announcing today is hopefully one of many we’ll make as the market catches up to demand globally.” 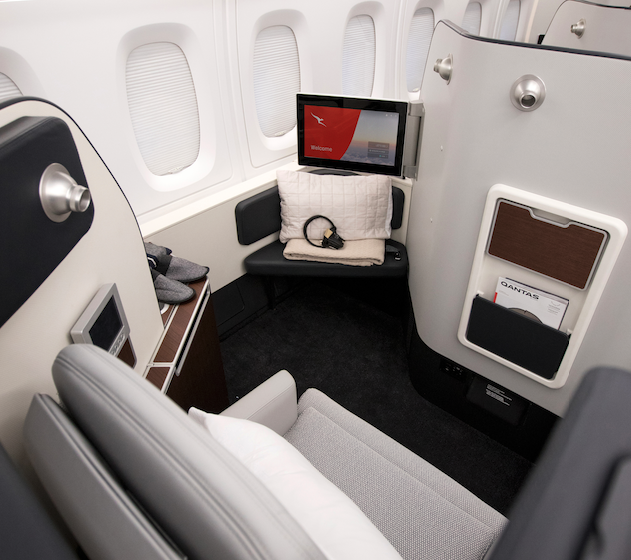 The airline also announced it would reinstate its full First Class offering at the end of this month both on the ground and in the air as post-pandemic international travel steadily recovers and the national carrier wakes up more of its A380 superjumbo fleet.

A fourth Qantas A380 has emerged from the Californian desert with Reginald Ansett (VH-OQH) leaving the storage yard this month for the first time since it was parked there in March 2020.

Qantas utilised the downtime while the aircraft were in the desert to upgrade the popular A380s increasing the number of premium seats and refurbishing the cabins. The aircraft have a reconfigured business class cabin, with 70 updated business suites, and an extended premium economy section with 60 seats, up from 35, as well as refreshed economy and First cabins.

The upper deck lounge has also had a full upgrade with booth style seating for 10 people, a self-service bar and an option to order signature drinks and snacks.

From 27 March, Qantas will reopen its Sydney and Melbourne International Business Lounges as more passengers take to the skies and revert its First Lounges in Australia, which operated as hybrid First/Business Lounges during the pandemic, to the full premium offering.