With the CIA releasing thousands of archives that have brought extraterrestrial life back into the limelight, we thought we’d jump on the bandwagon with some research from the supernatural savvy folk over at PsychicWorld.com.

The website has analysed official sightings from across Europe documenting the frequency of sightings, duration and what kind of UFO was seen, just in case you’ve been wondering what the extraterrestrials are getting up to on the other side of the world.

The research revealed that Europe has had 994 UFO sightings, all lasting an average of 12 minutes. The most common type of UFO witnessed are unidentified flying discs.

If you are a UFO enthusiast, Monaco is likely to provide you with the longest sightings, which last an average of 45 minutes! Of the four confirmed sightings, the most prevalent type of UFOs in Monaco are flying discs.

Liechtenstein ranks second with UFO sightings lasting an average of 39 minutes. Of the 12 confirmed instances, most witnesses claim to have seen a light formation moving in the sky. 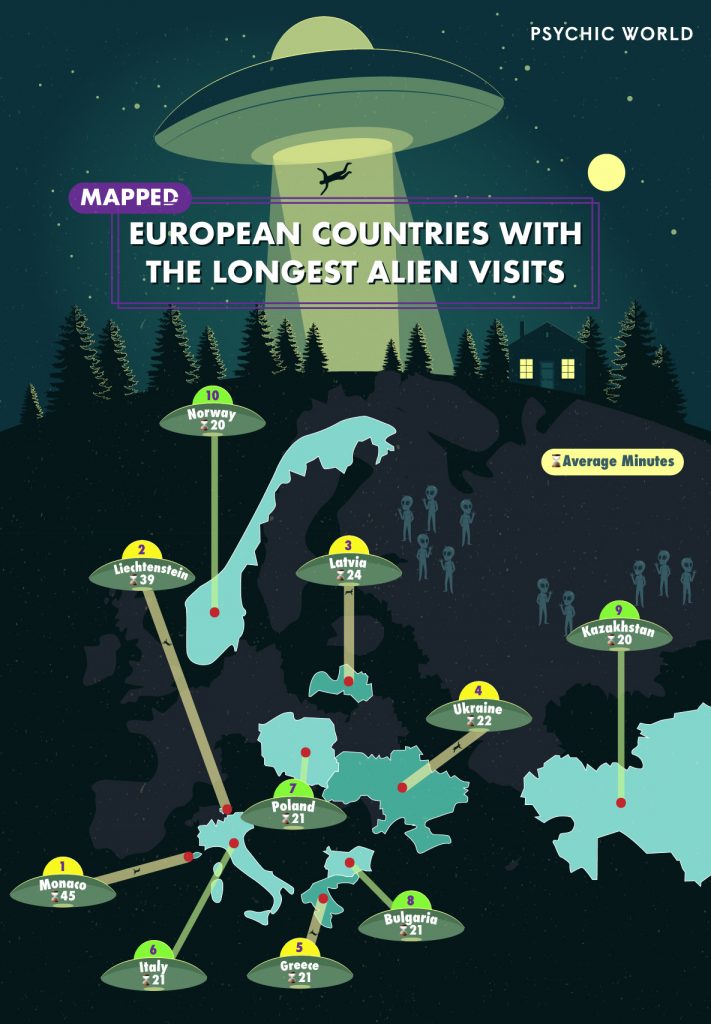 Following behind in third and fourth position are Latvia and Ukraine, with sightings lasting an average of 24 minutes and 22 minutes, respectively.

San Marino is the country where UFOs spend the least amount of time with no confirmed sightings, following closely behind is Georgia, with the average sighting lasting just 15 seconds. Both of the two sightings have been unexplained ‘fireballs’ in the sky.

Ireland stands as Europe’s UFO hotspot with 105 sightings lasting an average of 13 minutes. Records are mainly of unexplainable bright lights – the second most prevalent type in Europe. These lights are described as being either red, white or blue.

France ranks second with 71 confirmed sightings. However, these only last an average of six minutes (less than half of Ireland’s). Much like Liechtenstein, most witnesses in France have recorded a light formation in the sky.

More than $61m paid out to travel agents, as Tourism Minister meets with AFTA

Qantas and Alliance announce domestic tie-up, as Joyce says COVID-19 will be his last crisis

Tourist timeslots mean visiting France will soon remind you of visiting the dentist, although there will be less judging of your teeth.

From a beautiful manor in the Lake District to a charming East Hamptons bolt hole, Small Luxury Hotels of the World has unveiled some seriously swanky new digs.