Rex has been awarded a multi-million dollar assistance package by the NSW Government to support the creation of more than 2,500 direct and indirect new jobs.

The assistance package is drawn from the state government’s $250 million Jobs Plus program, and it saw a 25 per cent stock price increase for Rex between Friday ($1.22) and Tuesday ($1.52). 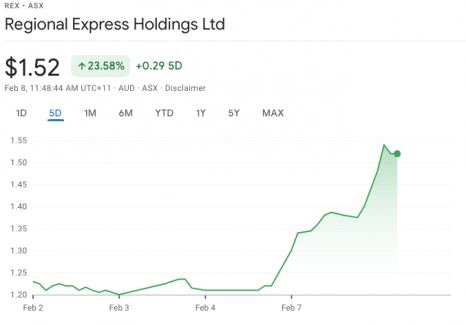 With the grant, Rex plan on developing a Boeing 737NG Flight Simulator Centre at Rex’s Mascot headquarters as well as a new Code C aircraft size hangar and office block at Sydney Airport.

Rex will also expand its call centre at Orange to cope with increased activities.

The grant received praise from NSW Premier Dominic Perrottet, as he commended the move as important for boosting local tourism and travel.

“By supporting Rex Airlines to expand its Sydney headquarters we are not only creating thousands of new jobs, but signalling to the world that NSW is open and ready to welcome travellers,” the Premier said.

Rex’s deputy chairman, the Hon John Sharp AM, also commended the grant and praised the decision by the NSW Government to support local travel during the pandemic.

“I would like to thank the NSW Government for this partnership with Rex,” Rex’s deputy chairman said.

“Without the State’s substantial assistance, Rex’s expansion plans in the State would never have materialised under this climate of pandemic and many new jobs would not be created.”

The grant will help Rex establish its Sydney-based operations, which includes flights from Sydney to Melbourne, Canberra, and the Gold Coast. It also flies to 56 remote and regional centres throughout Australia.