Melbourne evokes many things in the traveller psyche.

It is industrial chic meets high culture; a stage where emerging artists stand alongside established cultural icons to produce a playful, eclectic, feast of the senses.

This is what makes the Victorian capital and QT Hotels a perfect match. The brand lives and breathes art and design, bringing vibrancy, quirk and a touch of the rock ‘n’ roll mentality to each of its 10 properties across Australia and New Zealand.

Located in Melbourne’s high-end fashion district, but still a stone’s throw from the buzz of many of the city’s uber-cool cafe-clad laneways, QT Melbourne is a quintessential inner-city haunt.

In fact, during my stay at the boutique hotel, I didn’t need to catch public transport once – almost everything is within walking distance, from the trendy streets of Fitzroy to the delectable delights of Lygon Street and everything in between.

Thanks to the hard work of renowned interior designer, Nic Graham, and architect and design expert Shelley Indyk, the hotel lobby is a visual treat. 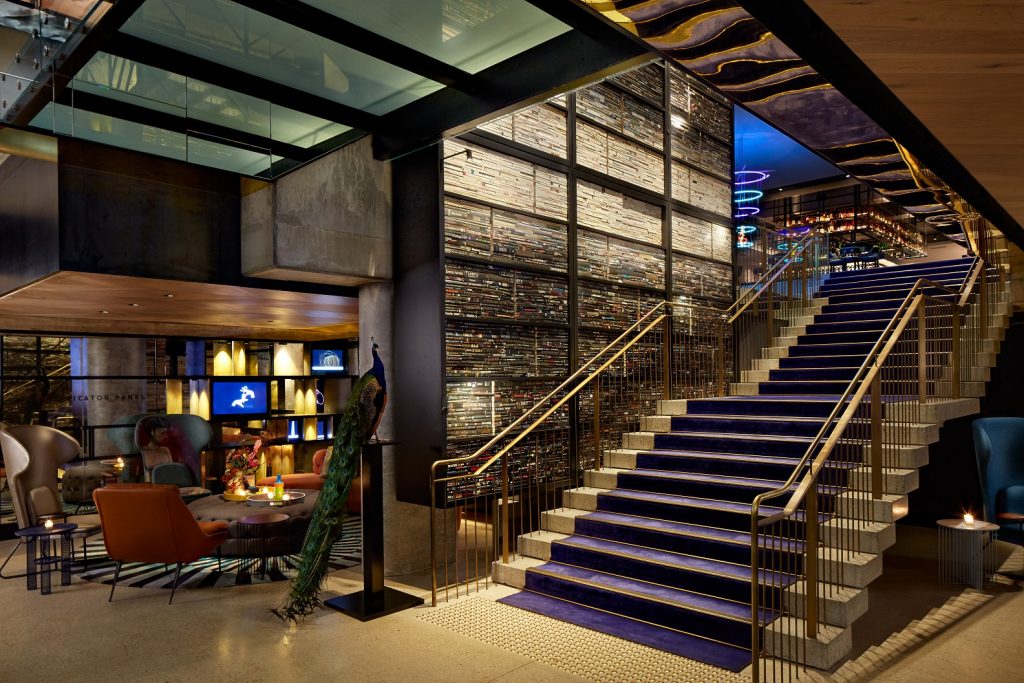 From the second I stepped through the Russell Street entrance, I was bombarded with an appealing mix of texture and pattern; eccentric, bespoke furniture competes with provocative graphics for your attention on a canvas of handcrafted steel, stone and timber.

My personal favourite moment in the hotel’s public spaces was rushing into the first-floor bathroom while already 15 minutes late for a dinner reservation to be confronted by a collage of renaissance-esk naked bodies. 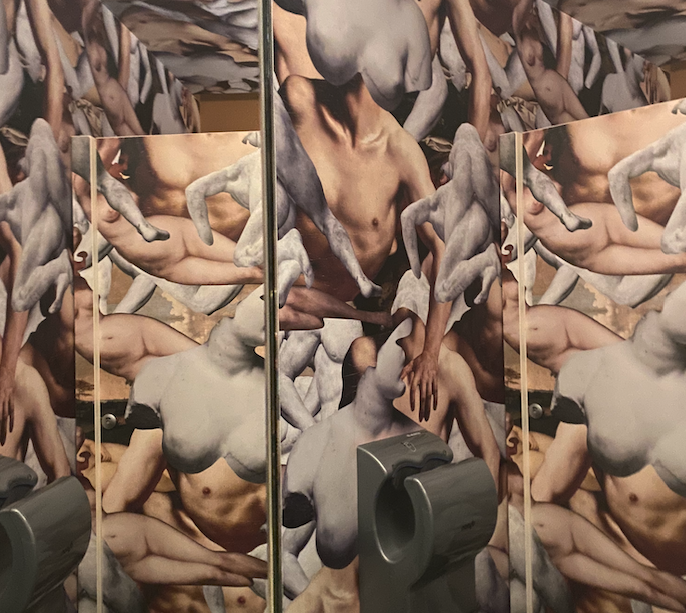 It was such an intriguing sight that 15 minutes late became almost half an hour thanks to a dire need to take selfies in such a unique setting. 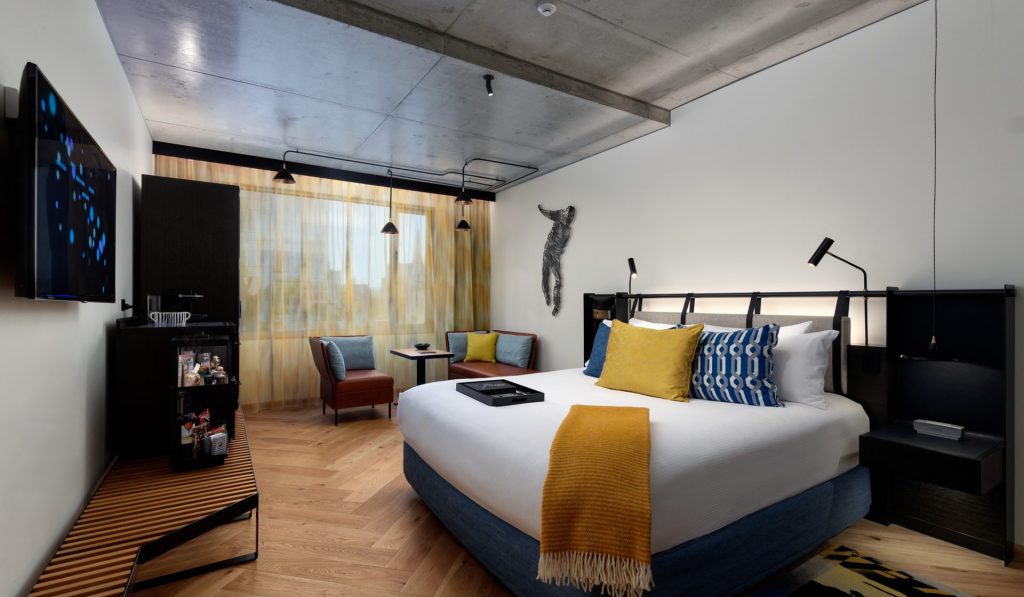 I was greeted by the welcome sight of a complimentary bottled cocktail and a slab of dark (vegan!) chocolate flirtatiously laid out on a side table, which was a surprising and thoughtful touch that I enjoyed while taking in the appealing industrial design and vintage-meets-modern vibe of the room. 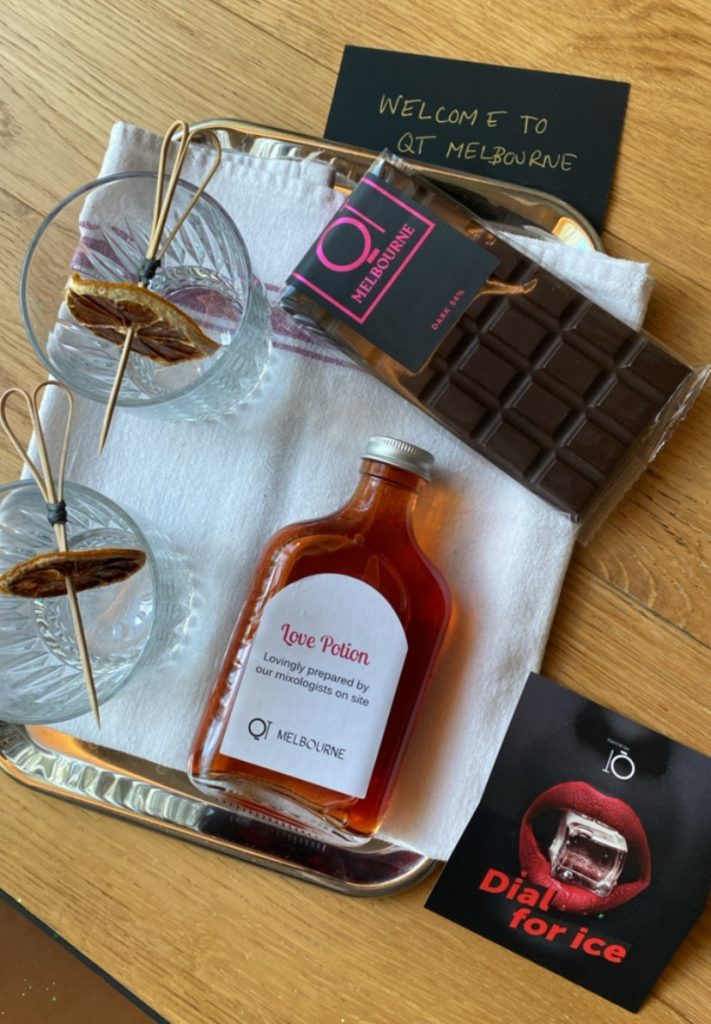 Plus, who doesn’t love Kevin Murphy amenities? Between the vegan chocolate and high-quality toiletries, the hotel managed to win the favours of this food-allergy-prone and curly-haired traveller.

In true Melbourne style, the hotel features not one but two rooftop bars – The Secret Garden and Rooftop at QT, as well as the opulent Champagne Bar and the Pascale Bar and Grill. 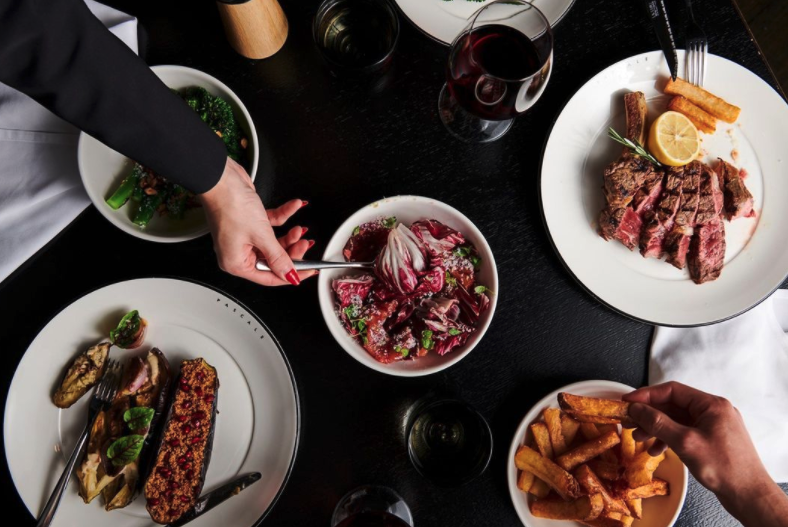 Having stayed early in the week, I only had access to Rooftop at QT (all other F&B options are only open Fridays and Saturdays, except for daily breakfast at Pascale Bar and Grill and room service options), however, the experience was nothing to be scoffed at. 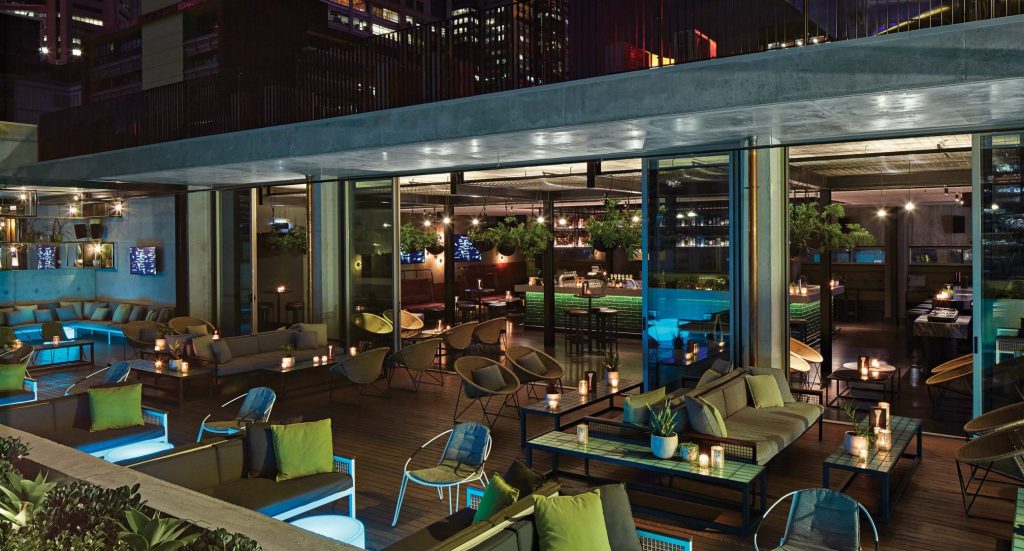 I spent many a lazy afternoon taking up far too much room on the bar’s comfy couches, surrounded by panoramic views of Melbourne’s skyline with cocktail in hand and magazine balanced in lap, feeling much more glamourous than I had any right to. 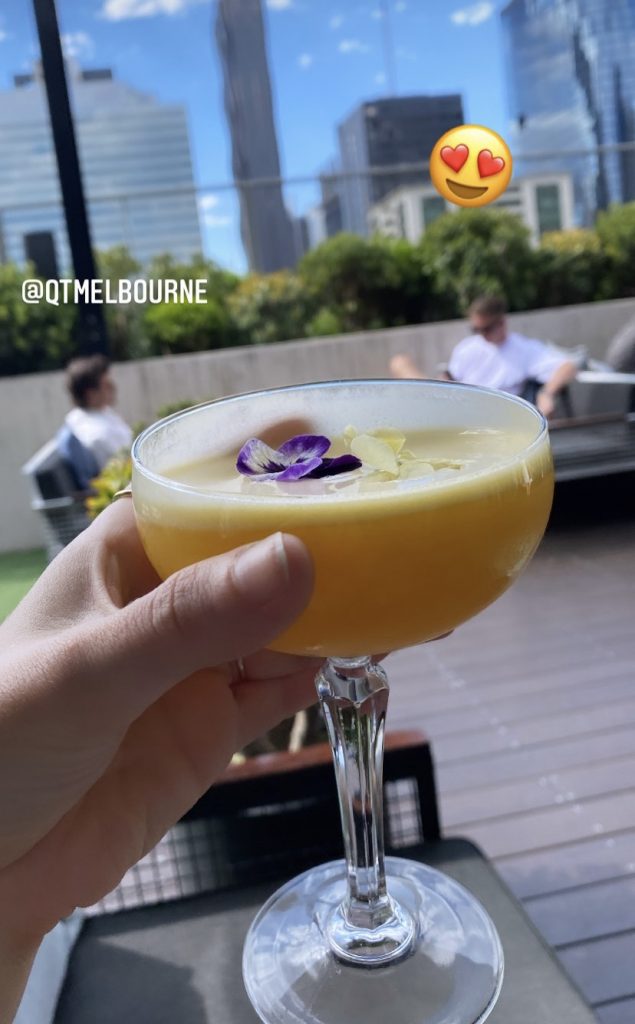 QT Melbourne has an app, and pardon my French, but it’s pretty bloody spectacular.

Downloadable from both the Apple App Store and Google Play, you can use the QT Melbourne app to request services like laundry pick up, car hire, room service, maintenance and extras such as a toothbrush, fresh towels, extra amenities and more.

This app was my best friend following a night of overindulgence at a few of Melbourne’s iconic laneway bars, which led to a morning desire for fried food and minimum human interaction.

I give the QT Melbourne a nine out of ten for its sheer embodiment of everything I love about Melbourne paired with thoughtful touches and creature comforts.

The eccentric industrialism of Melbourne’s streets flows throughout the hotel with a subtle luxury that allows you to feel both well cared for and a little bit bad-ass.

IHG is welcoming its guests to the next chapter of travel with a veritable shirt ton of perks! Though, that’s not to say it will write your clients into the latest instalment of its Twilight fan fiction blog.

East Hotel embodies the renewed energy and style of our capital city, with the added perk of significantly fewer roundabouts and a noticeable absence of stray politicians milling about.