Qatar has shown its support for Breast Cancer Awareness Month by drawing a pink ribbon in the sky.

The airline operated a special ‘Think Pink’ flight, exclusively crewed and piloted by women, from ground operations, technical, and dispatch teams to the flight deck and cabin crew.

Flight QR9901 took off from Hamad International Airport (HIA), on Saturday 17 October at 9am local time, and landed back 65 minutes later after completing its special flight.

The flight path, which traced the shape of a pink ribbon, attracted the attention of many who tuned in live to tracked the flight.

The Think Pink flight carried exclusively female passengers who were invited as special guests and received a special Think Pink service including announcements from the captain, pink-themed food and beverages along with wristbands and limited-edition pink BRICs amenity kits. 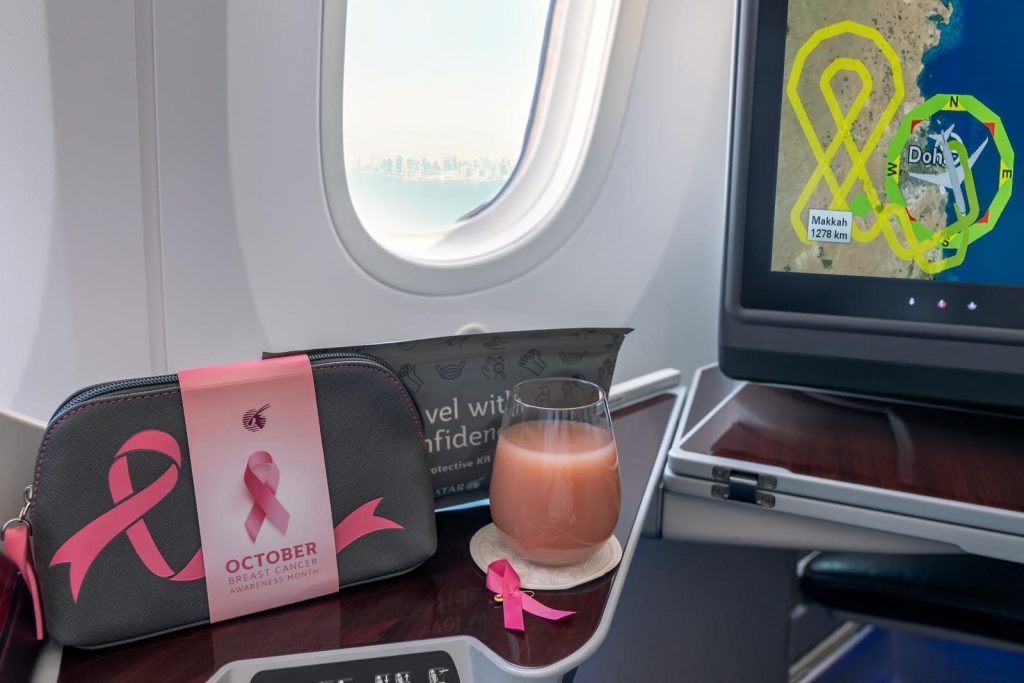 “Together, we hope to reach as many people as possible, and help save lives.”

Flight QR9901 is the latest in a month-long program organised by the airline in October to raise awareness of breast cancer prevention and control for its thousands of employees worldwide, as well as passengers and the general public.

Earlier this month, Qatar Airways introduced an exclusive Think Pink experience for passengers in the sky as well in its lounges, offering custom-designed limited edition amenity kits and pink-themed special menus on select flights throughout the month of October.

Do you only read Travel Weekly for news about airline alliances? Well, consider this our latest effort to keep you subscribed.

ScoMo and Hunt have been left red-faced after some cheeky Aussie athletes proved Australia’s travel ban for India was not airtight.

While some might have hoped the G7 leaders’ summit would prompt Australia’s PM to change his tune on international travel, it appears to have had the opposite effect.

The tourism marketing agency has bounced out of the long weekend and into the working week with a couple of big announcements.

After the Maroons’ dismal performance last week, at least this will give Queenslanders something to cheer about.

Fancy a gig at the French hospitality giant? Well, it might be time to update the old CV, with more than 1,000 vacant roles waiting to be filled.

Are your clients the type who drive a Range Rover, shop at Gucci and eat caviar on toast for breakfast? Satisfy their expensive taste with this.

Paradise awaits: How to island-hop down Malaysia’s east coast

Give your clients a taste of tropical paradise with an island-hopping trip down Malaysia’s east coast.

From bustling Southeast Asian streets and island getaways to ancient rainforests and highland retreats, Malaysia is full of surprises.

If your clients are seeking a Southeast Asian escape packed with cultural experiences, delicious food, island adventures and breathtaking natural scenery, we have two words for you: Malaysia awaits.