A Qantas flight from Sydney to Perth recently took off without any of the passenger’s luggage in tow. Awkward…

Journalist Peter van Onselen brought the error to the attention of many, via a Twitter post that expressed his feelings on the matter.

In particular, he called the error an “insane incompetence by Qantas”, adding it was “absolutely unbelievable”. 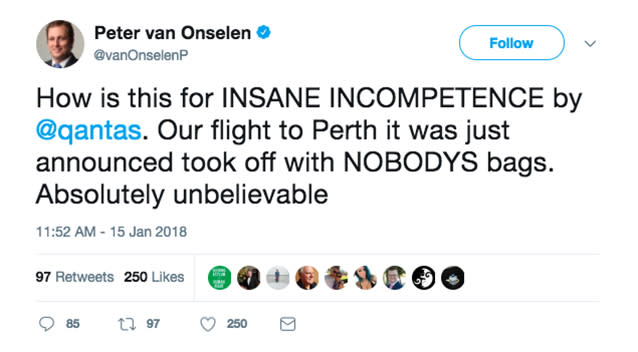 Speaking to Travel Weekly, a spokesperson said the slip up was due to a mechanical fault, and that all the bags had now arrived at their destination.

“Due to a mechanical issue with the baggage belt at our Sydney Domestic Terminal, approximately 100 of our customers’ bags did not make it on to their scheduled flight,” the spokesperson said.

“The backup baggage belt is now operating and the bags have been placed on the next available services.

“We understand delays are frustrating, particularly during the holiday period, and we apologise sincerely to customers for the inconvenience this has caused.”

It comes in a tumultuous time for aviation, with a plane skidding right off the runway in Turkey, and new revelations emerging about MH370. Qantas has also been busy, launching its latest Dreamliner and revealing its adorable new Aussie name.

One response to “Qantas flight departs without passenger’s luggage”