Travellers can start rounding up their fave four-legged friends, because Queensland’s famed Mary Valley Rattler steam train has introduced a new ‘Pets on Board’ service alongside its new Summer Sunset Express.

The ‘Pets on Board’ service was launched with one of the Sunshine Coast’s most special dogs on board to celebrate – Bear, an Australian Koolie.

Bear is part of a team at the Detection Dogs for Conservation Centre at the University of the Sunshine Coast (which is supported by the  International Fund for Animal Welfare), and is trained to detect live koalas through the scent of their fur.

Bear’s obsessive enthusiasm has not always been appreciated. He was surrendered by his previous owners, whose small flat proved too confining for such an active dog, and he began destroying property.

After relocating to USC, Bear has put his energy to positive use in the great outdoors, playing an important role during the 2019 bushfires to help locate koalas who were injured, or their habitats were destroyed, to allow them to be rescued, treated and rehabilitated.

Bear brought along another detection dog, Maya, for the ride (both are pictured in the featured image above).

The iconic steam train has also introduced a new Summer Sunset Express service to celebrate the arrival of summer. 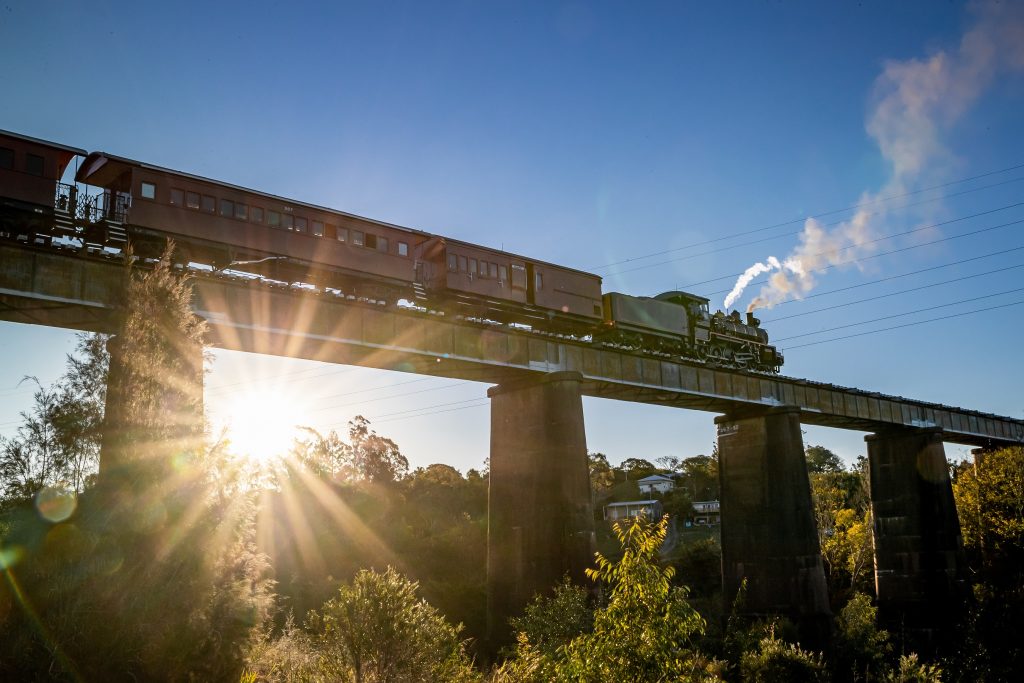 Passengers can enjoy a sundowner as the heritage train steams through the spectacular countryside of the Mary Valley.

The new service will run on Saturdays with the first departure scheduled for 5 December and will run through to 30 January.

There is also the opportunity to travel in the iconic first-class Club Car where passengers enjoy priority boarding, a meet and greet with the drivers, choice of beverage and antipasto tasting plate, and access to the verandah to capture great summer sunset pictures.

The Mary Valley Rattler operates a range of services across the week from Gympie Station to Amamoor in the Mary Valley. The three-hour journeys capture the beauty and history of the rich agricultural and former gold mining region from the comfort of beautifully restored heritage carriages.

QLD quarantine facility could be used for returned cruise passengers

Did you want to spend more time with the friends you made on your cruise? You might be able to, although it may involve getting quite unwell.

Those planning travel in France would be well advised to get a rail pass and some good reading material if this announcement is anything to go by.

Whether you don’t trust your friends to water your plants while you’re on holiday or just fancy carrying around a little potted cactus, we present to you the latest hotel trend.