A passenger aboard a Frontier Airlines flight gave birth to a healthy baby in the toilet, according to a Facebook post from the airline.

The passenger went into early labour on a flight from Denver to Orlando on 17 May, the post said.

Captain Chris Nye, the pilot of the aircraft, said in a statement that the plane diverted course to Florida’s Pensacola Airport, but then continued to Orlando after the mother when the mother and baby could disembark with the assistance of medical personnel.

“Dispatch did a great job as well by suggesting Pensacola Airport and getting a gate and paramedics ready for us.

“This was a job well done, and I was happy to see everyone working together to successfully deliver a newborn on an aircraft!” 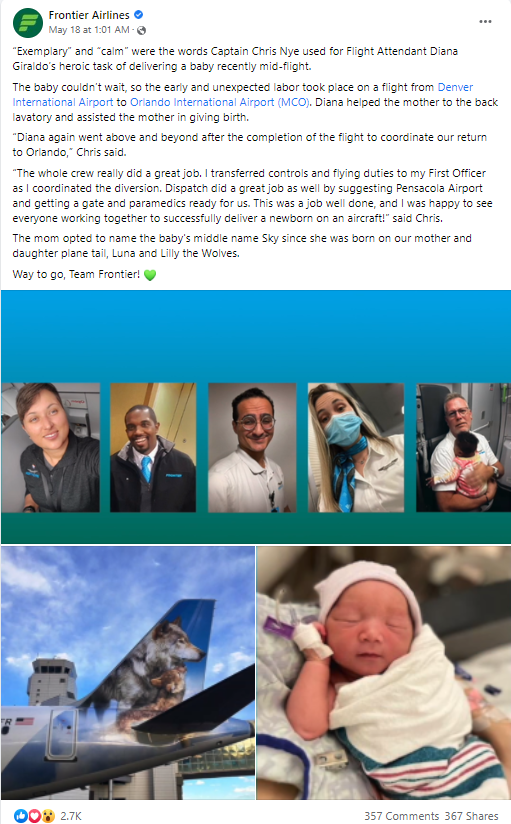 The baby’s name and gender are yet to be shared publicly, although the mother did reveal that the baby’s middle-name is Sky due to the unusual circumstances of the new-born’s arrival.

This isn’t the only baby born in the air in recent years.

Channel 7 reported that in May 2021, a woman went into labour on board a flight from Salt Lake City to Honolulu.

However, this time a flight attendants heroism was not needed as there was a doctor and three NICU nurses on board, all of whom jumped into action.

Are you a 'local legend'? Bonza is on the lookout for 17 ambassadors!

Super Bowl brawls have spread from bars to airlines, with these two passengers venting their passions for the sport in a way that did not mesh with conventional air travel etiquette.

The US aviation authority has clocked 3,889 reports of disruptive passengers in the past year, more than 20 times the number recorded prior to the pandemic.