It’s safe to say 2019 was among the most eventful years Hawaiian Airlines has had in nine decades.

The year-long observance of the airline’s 90th anniversary – a milestone reserved to only a handful of commercial airlines – was marked by exciting new routes, renovations to our airport lobbies, a fleet expansion, and a host of sustainability and cultural initiatives.

“It has been a remarkable time of high-paced growth and fleet transition while honouring our past and connecting people with aloha,” Peter Ingram, president and CEO of Hawaiian Airlines, said in a year-end letter to employees.

“I extend a sincere mahalo for all you have done and continue to do for our company and the communities we serve.”

Here’s a recap of Hawaiian Airlines’ 90th-anniversary celebrations and key accomplishments in 2019:

Hawaiian Airlines held a plane pull fundraiser at the Castle & Cooke Aviation Hangar for its 90th birthday on 11 November.

Approximately 2,000 people representing the airline and corporate teams throughout Honolulu competed in the charity event that raised $33,000 for Sustainable Coastlines Hawaii. 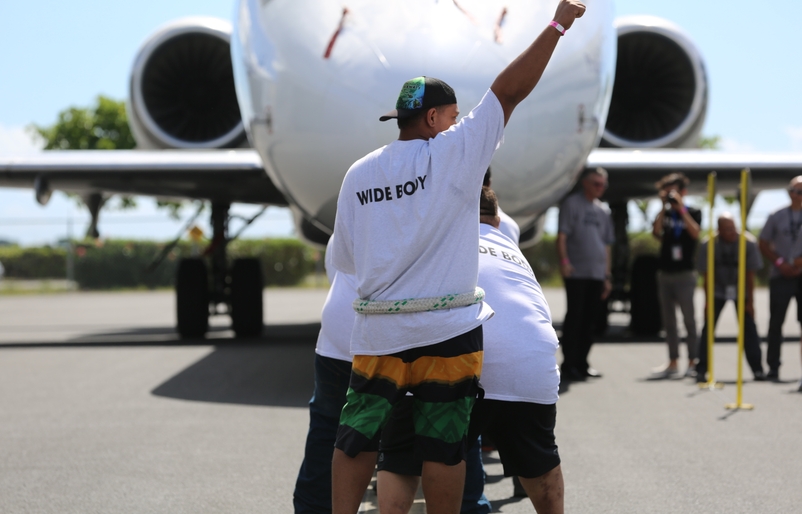 Earlier that morning, Hawaiian Airlines surprised guests aboard HA1111, a commemorative flight back in time.

The trip replicated the airline’s first service from Honolulu to Hilo on the Island of Hawaii with a stop on Maui, and flight attendants wore vintage company uniforms from the 1960s through the ‘90s. Each guest received a birthday card with a gift of 90,000 HawaiianMiles. 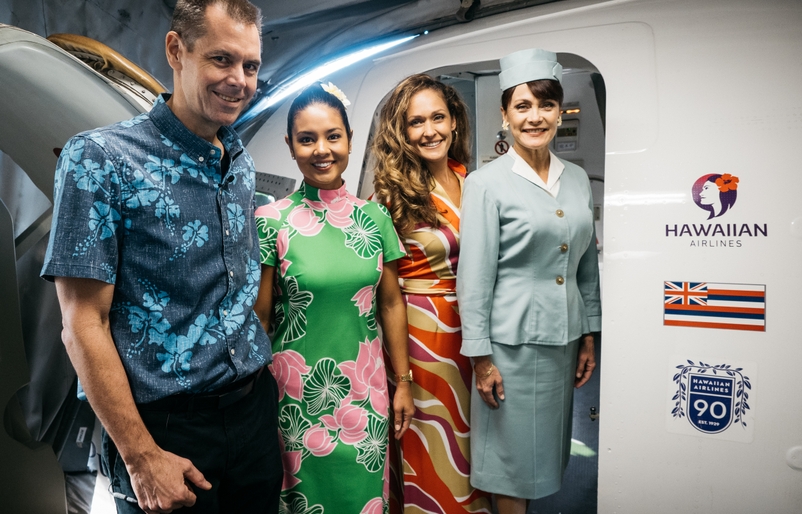 An independent ICF analysis, commissioned by Hawaiian, reported that our airline generated the equivalent of $9.3 billion in economic benefit for Hawaii and supported more than 60,000 jobs in 2018.

In November, our employees hosted a special welcome at the Daniel K. Inouye International Airport for two veterans traveling to Honolulu from Sacramento for the 78th anniversary of the attack on Pearl Harbor – Col. Clarence Anderson, a World War II pilot and Pearl Harbor survivor, and Lt. Cmdr. Lou Conter, one of three remaining survivors of the USS Arizona.

The Hawaiian Airlines Veterans Employee Resource Group, alongside a cohort of active-duty US Navy sailors, gave them an honourable recognition, including a red-carpet walkway, patriotic flags, recognition bell, and a group salute.

Additionally, flight HA19 was staffed with an air and army national guard flight crew and captain, and a veteran first officer. 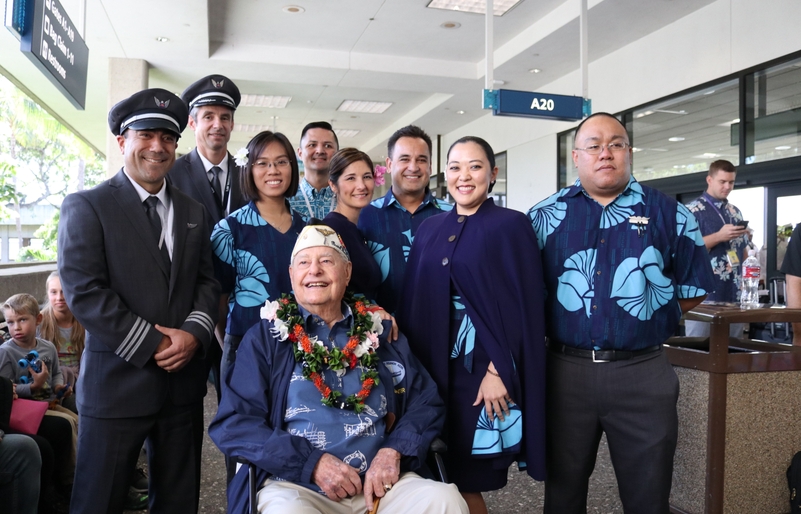 Hawaiian Airlines, along with nine other members of the Hawaii Green Growth Sustainability Business Forum, invested in a pilot carbon offset project by The Nature Conservancy.

The project will result in the management of 8,245 acres on Hawaii Island, also known as the Kona Hema Forest Preserve, and allow The Nature Conservancy to sell the carbon captured to entities that wish to offset their carbon emissions.

“We hope that this project demonstrates that a carbon offset market can be developed in the islands, which would be a great new industry for Hawaii that currently keeps our land in agricultural use,” Ann Botticelli, Hawaiian’s senior vice president of corporate communications and public affairs, said. 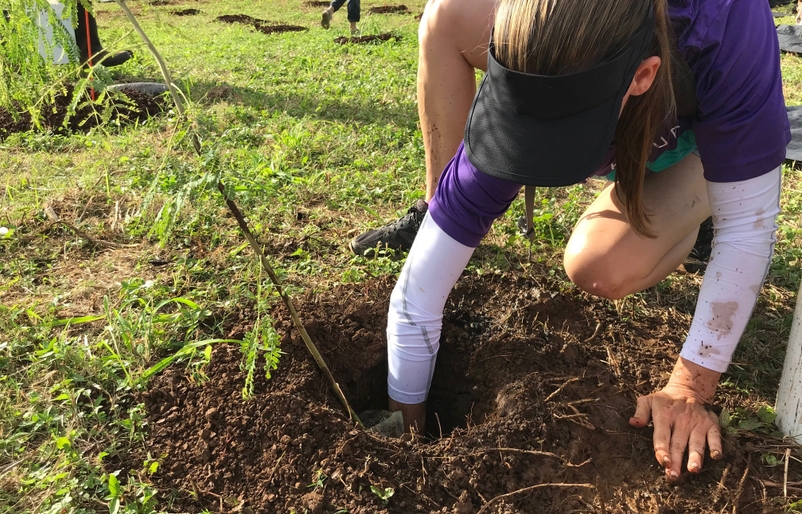 Hawaiian Airlines partnered with local and international organisations to host a series of beach clean-ups throughout the Pacific, including Sydney, Australia; Chigasaki, Japan; Auckland, New Zealand; Waimanalo and Kahuku, Oahu; and South Point, Island of Hawaii.

Each gathering exposed volunteers to the realities of plastic pollution and the effects it has on the oceans and the world’s coastal regions.

The result of our collaboration brought waves of positive impact to coastal communities throughout Hawaii and New Zealand. 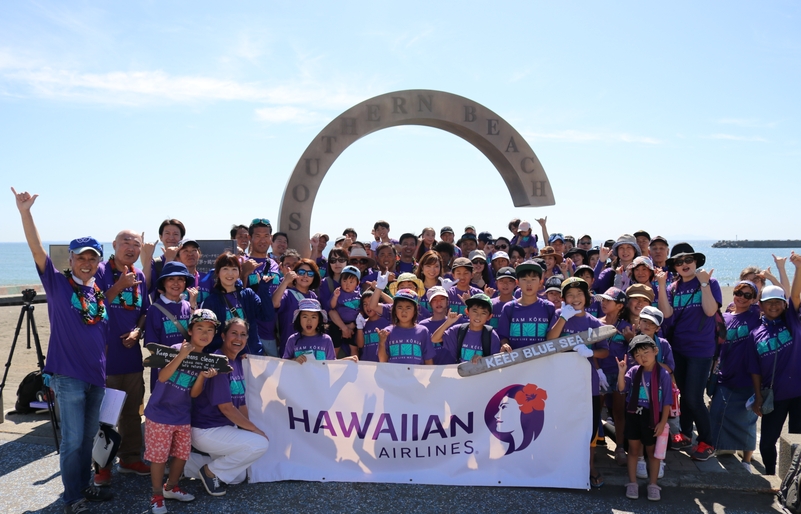 Hawaiian Airlines became the first US carrier to adopt the Pacelab Flight Profile Optimizer in its aircraft cockpit.

The technology augments flight plans done hours before departure by informing pilots about real-time aircraft data and meteorological information while recommending optimal altitudes to reduce fuel consumption throughout the flight.

Additionally, the airline teamed up with Carbon Lighthouse to improve energy efficiency at the Hawaiian Airlines Airport Center.

Hawaiian Airlines and Raw Elements USA, the airline’s official reef-safe sunscreen partner, came together in the heart of Waikiki to recognise 1 June as the inaugural World Reef Day and spread global awareness about the health of coral reefs and oceans. 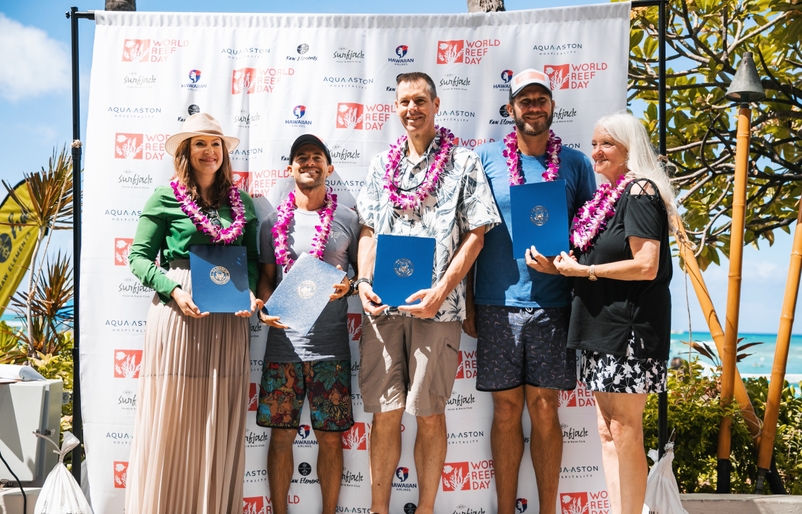 This year, Hawaiian Airlines became a major sponsor of the 34th annual Eddie Aikau Big Wave Invitational. With hee nalu (wave sliding) holding deep roots in Hawaii’s history, the airline said it was a natural fit to sponsor one of the world’s premier surfing events.

This summer, Hawaiian Airlines embarked on a refresh of our lobbies with new, culture-centric designs.

The airline’s neighbour island renovation started at Kahului Airport (OGG), the second-busiest airport in the state, and concluded with Hilo International Airport (ITO).

All of our Hawaiian Airlines’ local lobbies now feature new and faster self-service kiosks to enhance the day-of-travel experience for our guests. 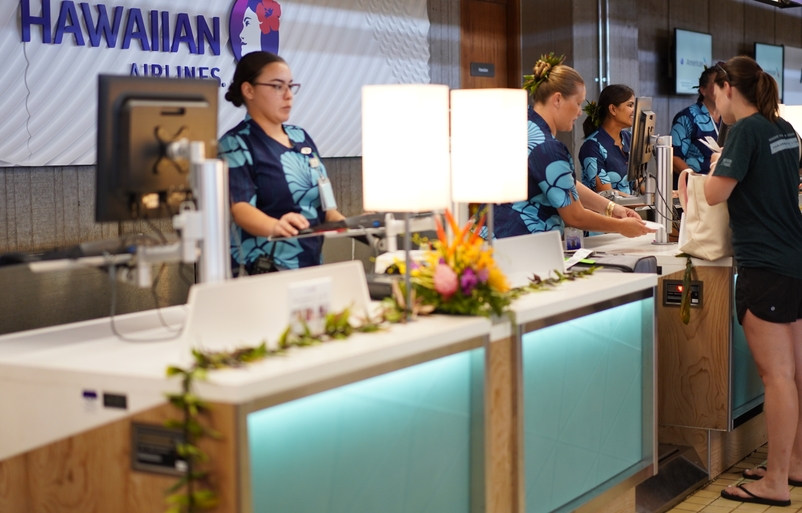 After the launch of its nonstop service to Boston, Hawaiian Airlines transported cultural practitioners from Bishop Museum, the Office of Hawaiian Affairs and Paepae o Heeia Fishpond to Massachusetts’ Peabody Essex Museum.

There, they conducted a cultural ceremony for one of the last remaining Ku renderings. Ku, a carved statue of the Hawaiian god Kukailimoku, required a proper moving ceremony before being transported to its new home.

Ingram later reflected on the opportunity, saying: “As our route map has grown, we have had increasing opportunities to unite precious cultural artefacts with those who care deeply about their preservation.

“It is an enduring benefit of remaining firmly tethered to this archipelago, and one that I deeply appreciate.”

In celebration of Olelo Hawaii (Hawaiian language) Month in February, Hawaiian Airlines established an olelo Hawaii certification program for employees. The certification, which is still available to employees at no cost, is an extension of the airline’s commitment to perpetuate Hawaii’s culture. 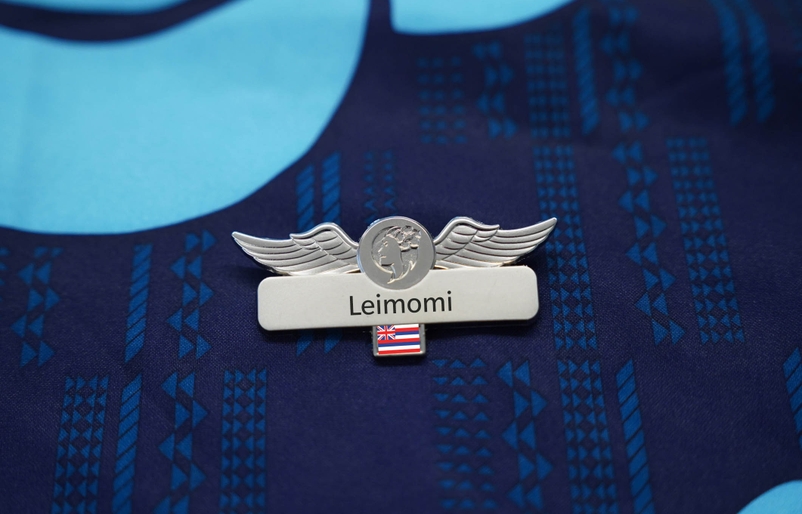 In the same month, Hawaiian Airlines also unveiled a pop-up Hawaiian Culture Resource Center in the heart of its Honolulu headquarters. 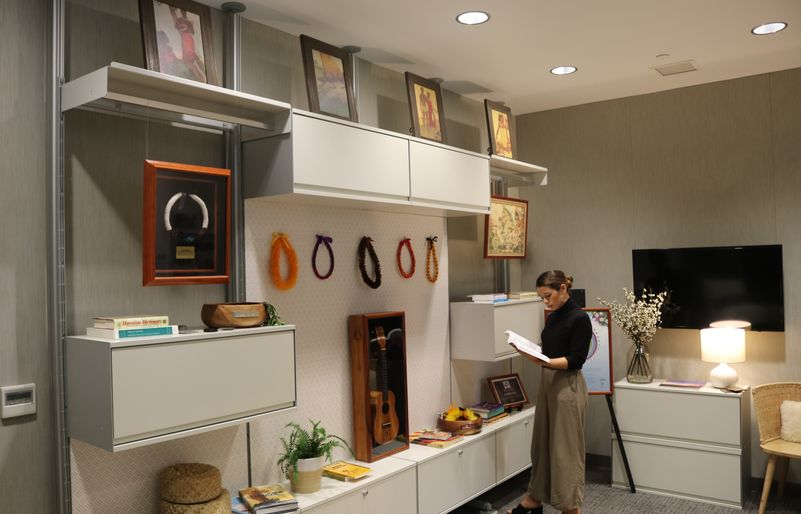 Traveling between Japan and Hawaii got even more seamless this November after Hawaiian Airlines began serving Fukuoka on the island of Kyushu.

Furthermore, the airline’s footprint on the US East Coast expanded with the launch of its Boston service, bringing New Englanders closer to the Aloha State. The service launched in April, becoming the longest US interstate route. 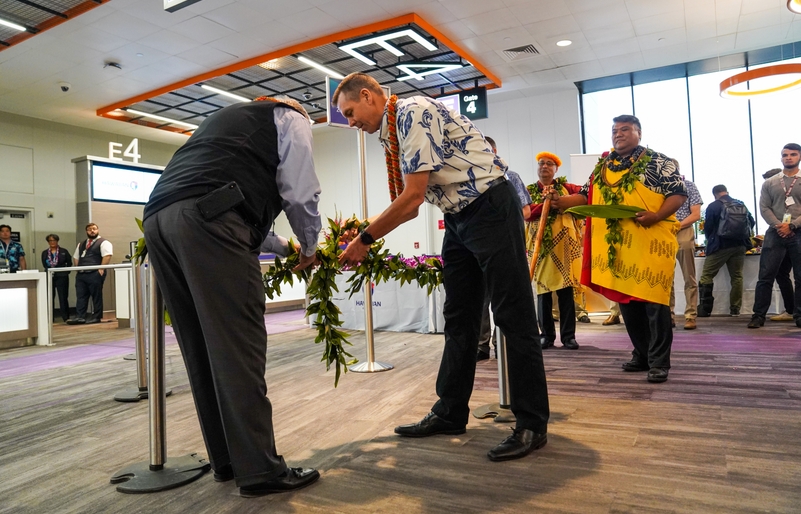 Hawaiian Airlines retired its Boeing 767-300ER fleet after aircraft N594 completed its final commercial flight from Sacramento to Honolulu. The Boeing 767s flew Hawaiian skies for over 17 years and the fleet, at its peak, consisted of 18 aircraft.

Last year also saw the Airbus A321neo allow the airline to introduce a new nonstop service that connects Sacramento and Las Vegas to Maui and expands its service to San Francisco, Los Angeles (seasonal) and Seattle. 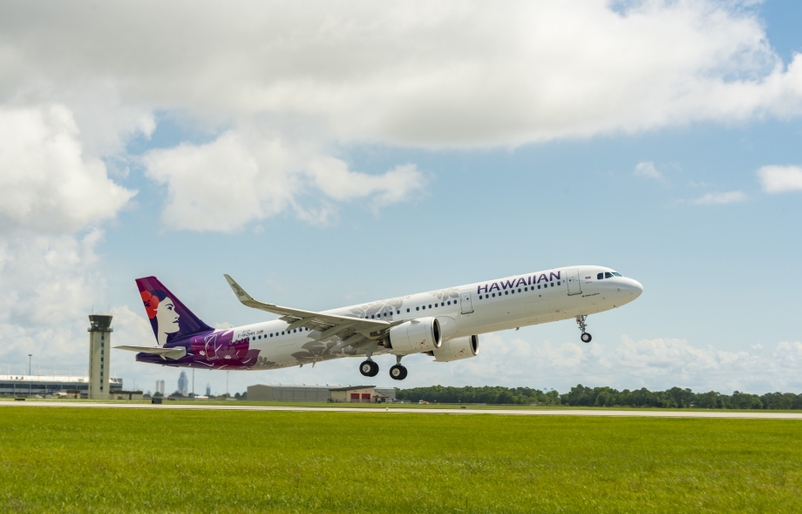 Down under, Hawaiian Airlines’ Aussie ‘ohana celebrated 15 years of service between Honolulu and Sydney and launched a codeshare agreement with Virgin Australia to welcome more guests throughout Oceania.

‘Ohana by Hawaiian, operated by Empire Airlines, celebrated five years of service between Honolulu and Moloka‘i and Lāna‘i by gifting one million HawaiianMiles to two non-profit organisations and helping restore the Moloka‘i Land Trust’s Mokio Preserve.

The icing on the cake for Hawaiian Airlines in 2019 was marking 15 straight years as North America’s leader in on-time performance. 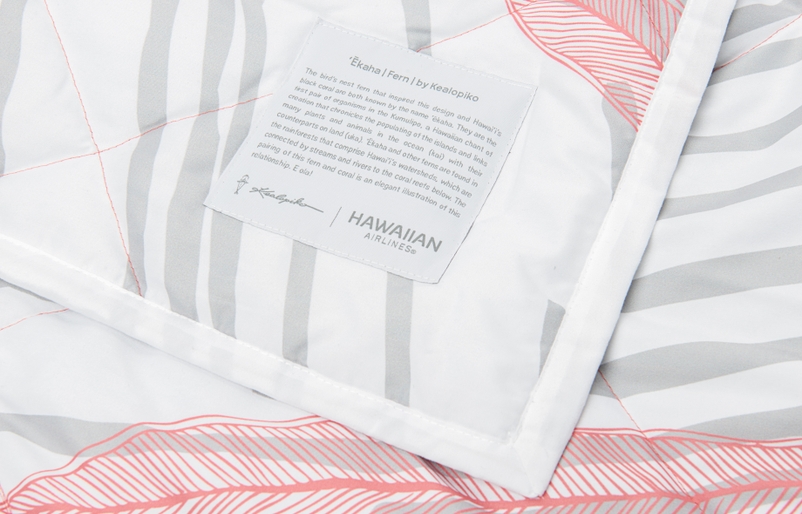 Guests were introduced to a refreshed menu of island-inspired drinks crafted by On the Rocks Premium Cocktails. Hawaiian Airlines also teamed up with Lion Coffee to bring its distinct, locally-roasted brew on board. 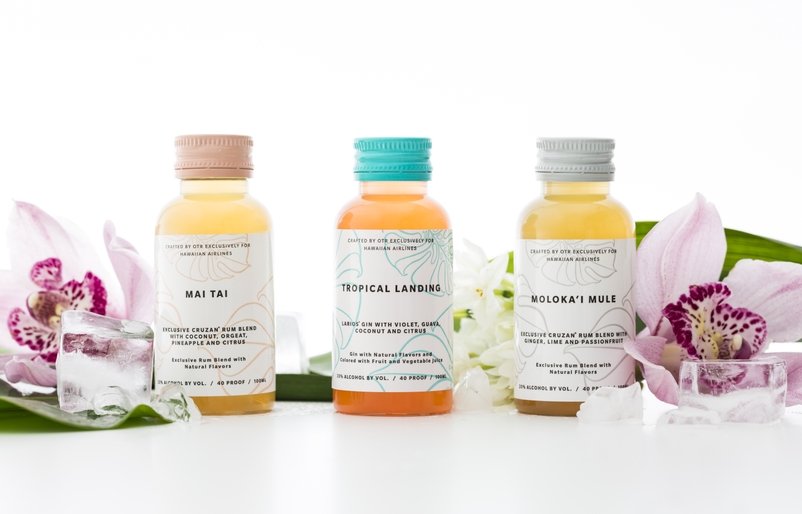 This article has been republished with permission from Hawaiian Airlines. You can read the original version here.

Save the date for Aloha Down Under 2020!

After putting an offer to him late last month, the Hawaii Tourism Authority has got its man.

It’s Mai Tais and Blue Hawaiians all round The Walshe Group office after Jacqui and her team snared the Hawaii Tourism Oceania account for the umpteenth time.

What is a ‘human-powered’ trip you ask? Well, you’re going to have to click on the article and find out, aren’t you?

AFTA’s financial health has been laid bare in its annual report, with the federation swinging to a loss.

With South Australia on track to open its border to NSW residents from midnight, neither of the rival carriers wanted to be outdone in capitalising on the good news.

The ASX-listed corporate travel tech player has found its new chair. As in the boardroom leader type – not the one with four legs and sometimes wheels.

And today’s reason for why we wish international borders would hurry up and open is this blockbuster new offering from Wendy Wu Tours.

The cruise line has flipped its travel agent support system on its head and done a 180. Next, it will try to perfect the worm and a double backflip.

A Malaysian state well-known for its islands and wildlife parks, Sabah provides ample wildlife experiences in the outdoors.

This week, we chat with Klook’s marketing director for Australia and New Zealand about Pete Townshend, ambient anxiety and his jaunts to the South Coast.

It turns out the land that may be used to construct a second runway at the new airport was purchased for way more than what it was worth a year earlier.