Since the start of the year, the Federal Aviation Administration (FAA) has received nearly 300 reports of passenger disturbances due to alcohol and intoxication. The FAA said the fines are part of the agency’s Zero Tolerance campaign against bad passenger behaviour.

The highest proposed fine of the eight announced on 22 November 2021 was over $US40,000 against a passenger who allegedly drank alcohol they brought onto their flight, sexually assaulted a flight attendant, then snuck off to the bathroom to smoke weed.

Another proposed fine of $US24,000 against a passenger was for allegedly taking off his mask multiple times after crew members told him to keep it on. He then swore at other passengers and yelled at a crew member: “This is America. This is free speech. What don’t you understand?” after being repeatedly asked to calm down.

The man was deemed a security risk and after pointing his finger in the face of a crew member and shouting “You!” the flight was diverted to Atlanta where law enforcement met the plane at the gate.

In August this year, the FAA sent a letter to airports asking them to coordinate more closely with law enforcement for particularly bad cases. The letter also asked that airports work to prevent passengers bringing “to-go” cups of alcohol on flights.

The rate of unruly passengers has dropped since the implementation of the Zero Tolerance campaign, however the FAA say that the rate is still too high. 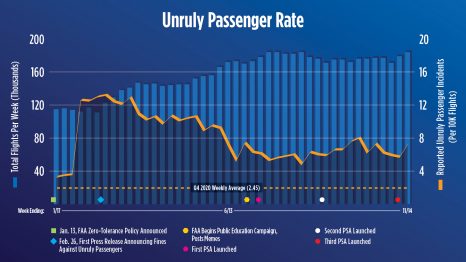 International president of the Association of Flight Attendants (part of the Communications Workers of America), Sara Nelson, recently discussed the unruly behaviour that’s common with airline passengers in the United States in an interview with CNN Travel.

“People are not allowed to drink their own alcohol on a flight or even in the airport, for that matter. They’re not allowed to serve themselves. And that’s news to some people,” said Nelson.

“Not only are they a threat to the crew and you, the flier, due to the possibility of people getting hurt directly in these violent outbursts, but they are distracting to the flight crew. They are potentially putting us in a position of missing cues for other threats, or larger threats, such as a coordinated attack.”

“I also want to stress that we’re not willing to accept this as the new normal,” said Nelson.

The FAA’s announcement comes as United States airlines are facing their biggest onslaught of passengers since the start of the pandemic.