A leading aviation association boss has admitted to the role of airlines in the spread of coronavirus.

The International Air Transport Association (IATA) CEO Alexandre de Juniac said the global mobility the aviation industry creates is a factor in virus spread, however, the freedom air travel provided was critical to the world we live in”. according to the Australian.

de Juniac said IATA is working closely with the World Health Organisation (WHO) to “operationalise what public health authorities need us to do”.

The association head also echoed Alan Joyce’s comments on the virtues of the advanced filtering systems on modern aircraft, which de Juniac said makes the air supplied onboard “as safe as that of an operating theatre”.

He said the important thing for airlines to communicate to passengers is to practice good hygiene.

“That’s simple advice like washing hands frequently, and sneezing into your elbow or a tissue,” he said.

IATA physician and medical adviser, David Powell also gave advice on avoiding the spread of disease on aircraft and said masks and gloves actually do a better job of spreading bugs than stopping them.

Powell told the Financial Review that the most important thing you can do to avoid infection on a plane is to be vigilant about hand hygiene.

“Contrary to what people think, the hands are the way that these viruses most efficiently spread. Top of the list is frequent hand washing, hand sanitising, or both,” Powell said.

“Avoid touching your face. If you cough or sneeze, it’s important to cover your face with a sleeve. Better yet, a tissue to be disposed of carefully, and then sanitising the hands afterwards. Washing your hands and drying them is the best procedure. When that’s not easy to do, alcohol-based sanitiser is a good second-best.”

Powell said masks are more useful for preventing the spread from people already infected than preventing infection for the healthy.

“Wearing a mask all the time will be ineffective. It will allow viruses to be transmitted around it, through it and worse still, if it becomes moist it will encourage the growth of viruses and bacteria,” he said.

“Gloves are probably even worse, because people put on gloves and then touch everything they would have touched with their hands. So it just becomes another way of transferring micro-organisms. And inside the gloves, your hands get hot and sweaty, which is a really good environment for microbes to grow.”

Despite this, passengers are continuing to come up with even craftier ways to avoid infection. Even better than the giant bottle technique.

The Daily Telegraph reported passengers have begun travelling with see-through portable tents over their bodies. 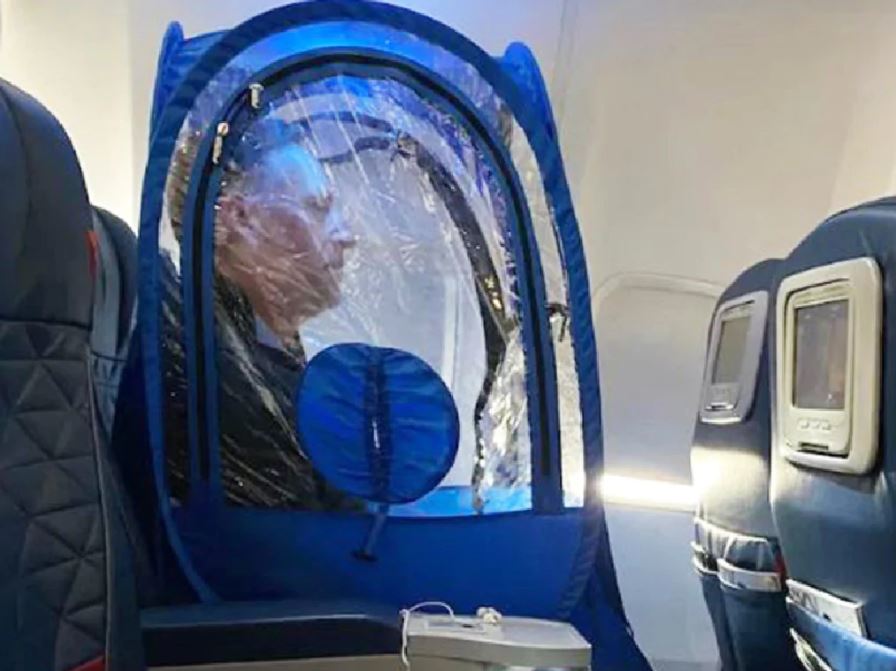 Flight diverted as passenger claims to be carrying coronavirus

In other coronavirus related aviation news, an aspiring Soundcloud rapper caused a plane to divert after claiming to be infected with the virus.

James Potok, who is also an aspiring social media star, was reportedly trying to get content for a viral video when he claimed he had travelled to Wuhan, where coronavirus originated, and was feeling unwell.

Potok was onboard WestJet flight 2702 from Toronto to Montego Bay, Jamaica when he reportedly stood up and made an announcement.

“I just came back from Hunan province, the capital of the coronavirus…I’m not feeling too well. Thank you,” he said, according to Toronto’s City News.

Business Insider reported the flight was forced to turn around two hours into the flight and return to Pearson International Airport because of the stunt.

Princess Cruises told Travel Weekly that the line has just been notified of an additional 41 people from the targeted screening samples onboard Diamond Princess who have tested positive for coronavirus.

This is on top of the already 10 people who have already been taken from the boat to a Japanese hospital earlier this week.

The nationalities of the new cases are not yet known.

“We expect that local public health authorities will be disembarking these guests today for transport to local hospitals immediately,” a spokesperson for the cruise line told Travel Weekly.

“The health and safety of our guests and crew remains our top priority. We continue to work closely with the Japan Ministry of Health on all protocols and procedures while ensuring the comfort and well-being of our guests.”

Meanwhile, Dream Cruises World Dream has been quarantined at Kai Tak Cruise Terminal in Hong Kong after eight mainland Chinese travellers who were reportedly onboard the ship tested positively for the virus.

The infectious passengers reportedly have since disembarked.

A statement from Dream Cruises revealed 33 crew members currently on board who were showing symptoms of coronavirus returned negative test results but further testing is necessary.

“Dream Cruises is fully cooperating with The Centre for Health Protection of the Department of Health to assist in expediting the health assessments for all passengers onboard World Dream,” the cruise line said.

“However, due to this situation, no passengers or crew will be allowed to disembark from World Dream until the test results from the affected crew members have been confirmed.”

The cruise line confirmed that there are Australian passengers onboard.

The ship was carrying 1,871 passengers with 1,692 from Hong Kong and the remainder of various nationalities including the United Kingdom, Australia, Canada, Taiwan and Macau.

The Tourism Authority of Thailand has advised that since the beginning of the year Thailand has implemented travellers’ health screening with thermal scans at Suvarnabhumi, Don Mueang, Chiang Mai, Phuket and Krabi International Airports.

Health surveillance systems are also in place at the Department of Airports’ 28 other airports nationwide including the above-mentioned Krabi Airport, and the U-Tapao Rayong-Pattaya International, Samui, Sukhothai and Trat Airports. All have stepped up hygiene measures, including extra cleaning and disinfection as well as provided hand sanitisers.

One response to “Coronavirus: More cases confirmed on cruise, IATA head acknowledges role of aviation in spread of disease”

The Westerdam has been rejected by numerous countries, leaving it stranded in the South China Sea for almost two weeks amid coronavirus fears.

The Minister for Health has suggested the travel ban may stay in place as the situation in China continues to develop, despite the effect it’s having on tourism.

Hawai‘i Tourism is giving away a luxury trip to the Hawaiian Islands as part of a  newly launched photo competition.