It may not seem like it right now, but new research by the federal government shows the outlook for Australia’s tourism industry has improved “significantly”.

While much of the data in the Australian Tourism in 2020 report is predictably bleak, it shows domestic tourism has been leading the gradual bounce-back, particularly in regional areas.

The report includes domestic travel data from the beginning of 2021, revealing that from January to March domestic overnight spend in regional Australia actually exceeded 2019 levels.

However, overnight spend in capital cities continued to suffer increased losses due to their reliance on international travel as gateway cities.

In 2019, 35 per cent of all visitor spend in capital cities came from international tourists; in Sydney and Melbourne, that number rose to 45 per cent and 40 per cent respectively. 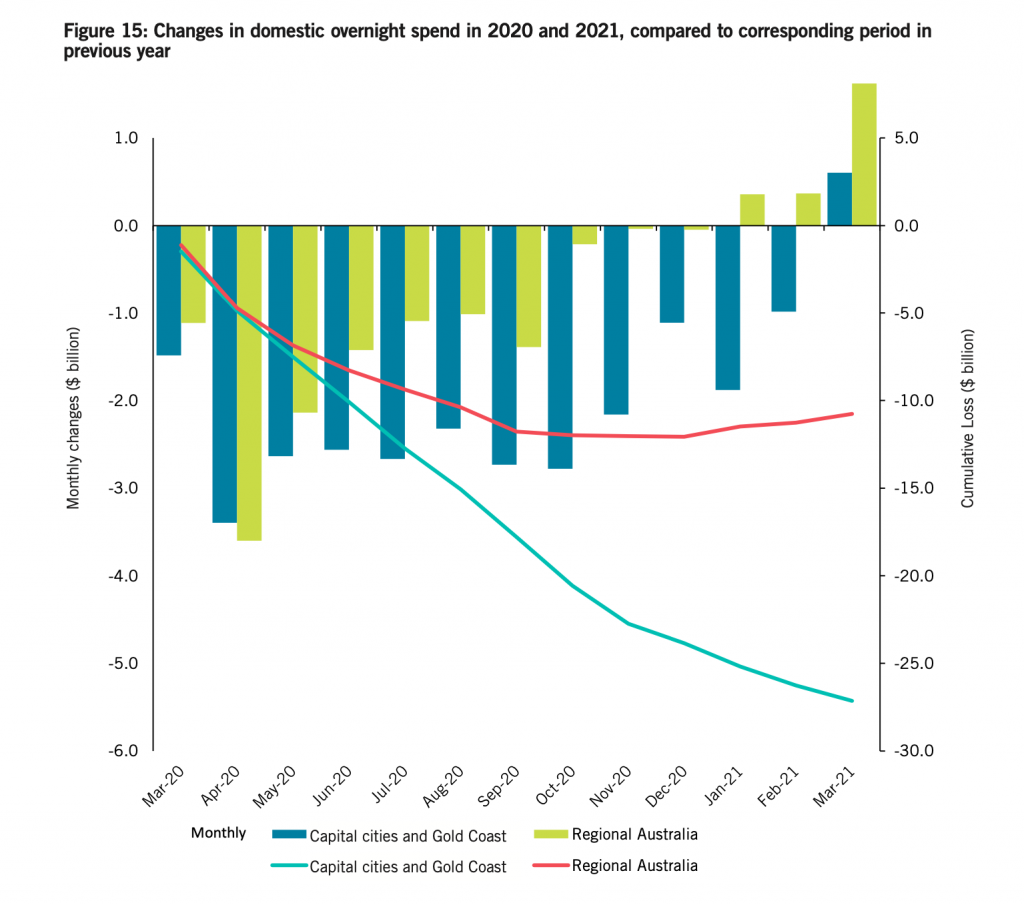 “The outlook for Australia’s visitor economy has improved significantly throughout 2021, along with a stronger than expected recovery for the national economy,” the report said.

“Domestic demand is on the rise. For the March quarter of 2021, total domestic overnight and day trip spend was $22.9 billion.

The report quantified the gut-wrenching impact Australia’s national lockdown in March 2020 had on the industry.

In April 2020, the most severely impacted month, visitor spend dropped by 91 per cent, equating to a $10.7 billion loss.

During this time, all regions experienced on average a 96 per cent drop in leisure spend compared with the same month in 2019.

These sentiments, along with pent-up demand, also saw regions within a two to three-hour drive of capital cities recovering faster than other regions with occupancy rates higher than pre-pandemic levels during peak periods.

By December 2020, spend on interstate trips had recovered to $1.7 billion – 42 per cent below the pre-pandemic spend of $2.9 billion, which accounted for 37 per cent of all domestic spend.

The data suggested the pandemic also accelerated structural changes within the industry, with part-time jobs eclipsing full-time jobs in September 2020 for the first time.

Looking ahead, the report found that while domestic tourism is beginning to find its legs, many travel businesses remain vulnerable; particularly for travel agents and tour operators.

“Australia has done a good job in keeping the spread of the virus under control,” the report said.

“However, while other countries are looking to reopen borders, Australia is taking a more cautious approach.

“There are still many questions being asked globally that will influence quarantine-free international travel.”

Aside from travel bubbles and small pilot programs, the report said the Treasury has predicted that Australia’s borders will likely remain closed until mid-2022, while the International Air Transport Association (IATA) has indicated that air travel won’t resume to pre-pandemic levels until 2024.

Greater Sydney lockdown extended for another month, with curfews for some

NSW’s cultural activities and natural landscapes give agents all they need to craft a family trip packed with joyful experiences for everyone.

Agents to receive $75.5 million in support as Tehan releases much needed funds

The federal government appears to be enjoying a slice of humble pie, after releasing funds it previously insisted were an “overestimation” that “would not be needed”.