Qantas has slapped Jacqui Lambie with a six-month ban for abusing staff and referring to the airline’s CEO as a “poof”.

According to The Sydney Morning Herald‘s CBD column, the Tasmanian Senator had previously had her access to the airline’s Chairman’s Club lounges, which the airline usually opens to all sitting MPs and senators, after failing to “see eye to eye” with staff members.

However, it was Lambie’s reaction that escalated the lounge suspension into one covering all of the national carrier’s services.

On March 25, Lambie reportedly blew up at front desk staff manning the Chairman’s Lounge in Melbourne, making references to “pussy power” and telling staff “your CEO is a poof”.

“It was the end of a long week in Canberra. I’d backed into a car that morning, got a speeding ticket on the way to work, and my flight home was delayed,” Lambie told SMH.

“It was a bad day for me. But it was worse for the poor Qantas staff who had to stand and take my rant. It was totally uncalled for and totally unacceptable behaviour on my part.

“I have apologised to the staff for my actions, and I’d like to do so again.

“I’ll take whatever punishment Qantas throws at me. I’ve done the crime and I’ll do the time, because that’s what I deserve.”

Virgin Australia has gained a customer out of the commotion, with the senator now having to rely on its services in and out of her home state of Tasmania.

Travel Weekly has reached out to Qantas for comment.

It looks like Lambie’s six-month ban will stop her from enjoying the spoils of Qantas’ spate of new domestic routes, with the airline launching seven new routes linking major capital cities.

They bring the total number of routes Qantas and Jetstar have added since the start of the pandemic to 45.

Five of the routes will be operated by Embraer E190 regional jets as part of QantasLink’s partnership with Alliance Airlines.

Passengers will also see more widebody aircraft with Business Suites on flights between the East Coast capital cities into Perth and Darwin.

Usually used for long haul international flights including Perth-London, the airline’s 236-seat Boeing 787-9 Dreamliner will begin operating up to nine Sydney to Perth flights per week.

Widebody Qantas Airbus A330-200 aircraft, which serviced international routes into Asia, will operate on more flights into Darwin from Sydney and Brisbane, and also into Perth from Sydney and Melbourne.

The additional flying will see Qantas’ capacity exceed 100 per cent of pre-COVID levels in the coming months and the Group’s market share around 70 per cent.

The national carrier is encouraging frequent flyers to cash in their points, revealing that 100,000 points club members have unclaimed travel benefits like lounge passes, hotel discounts and bonus points waiting to be used.

Qantas launched Points Club in March 2020 to reward members who earn lots of Qantas Points through ‘frequent buying’ on the ground, like doing their weekly Woolworths shop, using their credit card or paying an energy bill.

A recent audit identified that although eligible frequent flyers had been notified that they qualified for Points Club, a large number had not taken advantage of the program’s perks including Qantas Club memberships and lounge passes, car hire upgrades, bonus points on hotel bookings and discount wine. 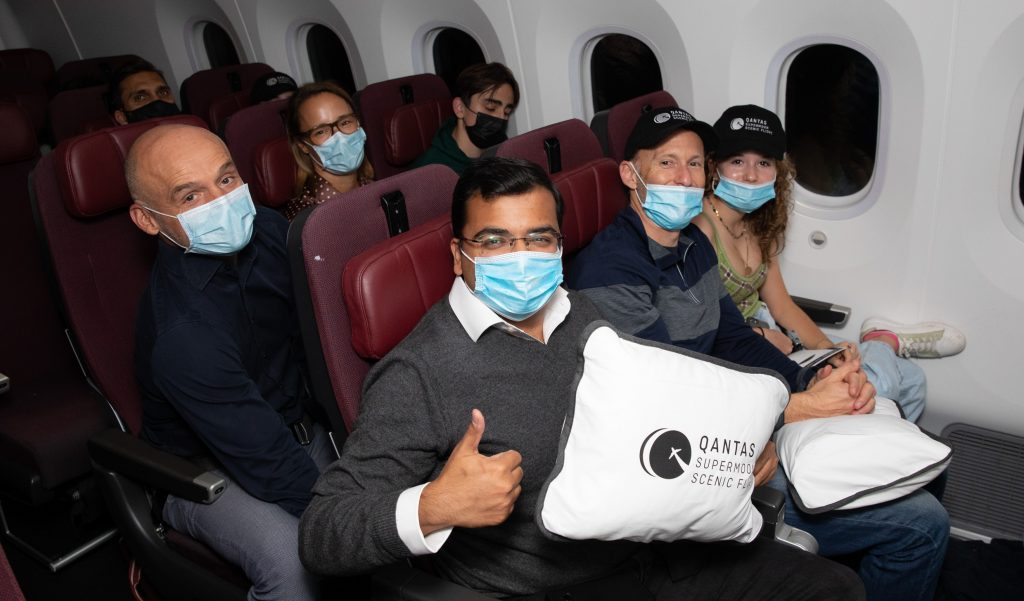 A 14-year-old high school student, a crown prosecutor, an amateur photographer and a 90-year-old former Qantas flight attendant were among the 180 passengers on board QF1250, the Qantas supermoon scenic charter flight that took to the skies above Sydney to view a rare double phenomenon of a supermoon and full lunar eclipse.

The Dreamliner departed from Sydney Airport at 7:30pm on Wednesday nightand climbed to a cruising altitude of more than 40,000 feet over the Pacific Ocean away from city lights for the three-hour tour.

As the aircraft began its specially designed flight path in preparation for the celestial show, passengers enjoyed “supermoon cakes” and cosmic cocktails, while CSIRO astronomer Dr Vanessa Moss provided expert insights into the science behind supermoons and lunar eclipses.

The pilots dimmed the cabin lights as the moon crossed into the darkest part of the Earth’s shadow, and passengers experienced totality for 14 minutes and 30 seconds.