"Try not to punch anyone” my guide Alistair says as we approach a blind corner. Wood smoke fills the air and I just register the sound of distant drumming when suddenly we are under siege, surrounded by four half-nude men bearing spears and murderous faces.

The chief of the infamous headhunting tribe Murut approaches with narrowed eyes and rests his hand on my shoulder, arm tensed.

Pleasantries are exchanged, and I respond to the chief’s questions with my name and nationality.

Then it gets deep. “Are you happy to be here,” he asks. I can’t imagine many people would be brave enough to answer in the negative and I am not game after such an ambush, clearly saying the right thing.

“You are welcome here,” he says, as a hunched lady in a black cape ushers me in by brushing my heels with leaves.

I’m convinced and yet I’m not in the murky jungles of Borneo. Mari Mari Cultural Village is located in the mountains a mere half an hour away from Sabah’s capital Kota Kinabalu.

For those who don't have the time or means to venture into Sabah's interior, it is the most accessible way to see the five ethnic tribes of Borneo. Described as a living museum, the actors are very convincing, staying in character at all times.

The other tribes at Mari Mari are the rice-farming tribe Kadazan-Dusun, the Lundayeh tribe, the sea gypsy tribe Bajau and the longhouse-dwelling Rungus.

The houses were all constructed by the traditional tribes and Mari Mari harks back to a time when indigenous groups did not have electricity. It is an action packed few hours that allows you to participate in the activities rather than stand by as a passive observer of culture.

Six gongs welcome you to the realm of the largest tribe in Sabah. Rice farmers by trade, the wooden house which they inhabit has a lady in traditional costume feeding chickens while inside a young girl sits cross-legged in front of a large green leaf topped with bamboo vestibules of rice wine.

All guests are invited to try it but only a little on the tongue is required, such is its potency. Traditionally the males of the family sleep on the floor while the ladies sleep in a high roof alcove with a detachable ladder to keep the women from unwelcome marauders.

In between the Dusun and Rungus houses is an open-air stall to cook your own curry in hollow bamboo. Small bowls of ingredients are lined up for selection. Chilli, onion, lemongrass, chicken, potato, ginger, salt and bay leaf are spooned in and cooked in an underground oven while you continue the tour.

Renowned for their longhouses, the fourth largest tribe in Sabah can house an entire village in one longhouse. Traditionally, a woman would wear a cape to signify that she was single and when a couple is formed the longhouse extends to the side.

There’s more food to sample at this tribal stop off, with a shot of honey served in the ubiquitous bamboo hollow.

A nomadic tribe that originated from Sarawak, the Lundayeh people were once head hunters who ceased their murderous ways upon the arrival of the British. The reason for the killings was spiritual, as the skulls were thought to protect the community.

They always killed outside their tribe and they were mainly warriors, not woman and children. To this day tribes in Sabah believe that rain is the spirit of someone they lost crying, Alistair says.

The second largest tribe of Sabah came from the Philippines for work, marrying locals and expanding this Muslim community. The house is heavily influenced by the religion, with a prayer room and wedding altar.

As one of the first tribes to barter with traders, their rooms are vibrantly coloured with clothes imported from China and Arabia. The food journey continues with a nut cookie called Kuih Jala as well as a hot tea of pandanus and ginger which helps sleep and aids digestion.

Historically renowned as fearsome headhunters, don’t expect smiles at this last stop off. The males are meant to be fierce and while a smile may occasionally slip, don’t be offended if they look stern. The first deadly activity we are introduced to is blow darting.

Traditionally these darts would have been poisoned but today they are not, which is fortunate given my inability to strike the coconut target. Next up is a smoking ceremony, where the young males of the tribe roll tobacco in a palm leaf and smoke it. If you’re a smoker, you are welcome to partake.

The finale is the most dramatic, with the tall tribal leader who ambushed me previously leaping for the high ceiling in a traditional trampoline game. Two tribesmen stand on the trampoline’s corners in order for the leaper to propel himself more than three metres high. The successful jump elicits a beaming smile from this fierce tribal warrior. Not so scary, after all. 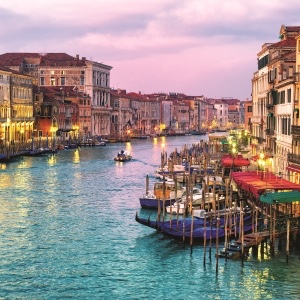 Love and luxury in Venice