5 ways to work up a sweat in Antarctica

Nothing will make clients feel smaller than propelling waist-high above sea level next to lofty icebergs and alongside breaching whales. The beauty of the kayak is that it is nimble enough to allow for close up positioning and mobile enough to pursue wildlife sightings. Chimu Adventures has a 13-day Off the Beaten Track itinerary which has an optional overnight sea kayaking and camping excursion, ticking off two bucket list experiences in one go. Aurora Expeditions has a philosophy of “getting out amongst it” and the kayak is an ideal vessel. Once the peninsula is reached, the tour leaders aim to paddle once a day, depending on the weather. Round the clock daylight even means that evening kayaking takes place under a surreal midnight sun. The kayak journeys are between five to 15 kilometres, or two to four hours, with a flask of hot chocolate for sustenance. The group size is never more than 12 and there is the possibility of shore landings. The equipment for this activity includes neoprene boots and pogies, which are insulated mittens attached to the paddle.

There’s one trans-Antarctic Range that most travellers don’t get to see. Sandwiched between the Ross Ice Shelf and nameless flat plains of ice, it divides east Antarctica from west Antarctica. Anyone who climbs the western flank of this mountain range will feel like an audacious explorer. It is part of World Expeditions’ new 12-day Antarctica Peninsula for Kayakers and Climbers itinerary. For those who wish to ramp up the intensity even more, World Expeditions also have a 12-day Antarctic Peninsula Basecamp trip which allows travellers to settle in at camp and from there set off on activities such as snow-shoeing and climbing.

Chimu Adventures’ 13-day Off the Beaten Track tour caters for clients who wish to hike and snowshoe, departing from specially selected landing points. On a recent journey, 28 people in several small groups snowshoed to the top of several nearby snowy peaks.

Spending a night on ice is not something many Australians can boast of experiencing. But on a Hurtigruten polar voyage, travellers can pitch a tent for the night on one of Antarctica’s ice fields during the 13-day Land of the Penguins itinerary. “The idea is to offer our guests an authentic experience in the spirit of the great explorer Amundsen,” Hurtigruten explorer product manager Mona Ringstrand said. The program was developed with the Norwegian Polar Institute with the safety of guests and the environment foremost in mind.

It’s not as harsh or even cold as one might think. “I’ll never forget camping on the snow – I was warm and comfortable throughout,” traveller Caroline Mongrain said. Getting so close to the lifeblood of Antarctica offers a multi-sensory interaction. “The light reflecting on the snow was amazing,” Mongrain added. “The snow absorbs sound, so there’s a silence that adds to the atmosphere.”

Aurora Expeditions says that camping is its most popular optional activity, with some sleeping al fresco for the first time in their life – one imagines that this would set the bar very high for first-timers. Chimu Adventures’ Off the Beaten Track trips have even seen campers waking to discover a pod of humpback whales swimming in the bay.

Despite being a massive expanse of snow and ice, clients don’t tend to associate Antarctica with skiing. But snow bunnies are in for a treat with Chimu Adventures. Recent Off the Beaten Track voyages allowed six back country skiers and their two guides to take seven skiing excursions over the 13-day journey. Elsewhere, Quark Expeditions also offers cross-country skiing across the plains of the great white land. It’s guaranteed that the tracks you cut will be fresh and unadulterated by any predecessors – expect perhaps a penguin. This high adventure option is only available on Quark’s voyages at the start of the Antarctic season with guides and skiing paraphernalia provided.

Travellers will never be more grateful for a thick and sticky wetsuit than when entering a sea punctuated by icebergs. These aren’t just any wetsuits, however. Aurora Expeditions provides waterproof snorkel dry suits to take the sub out of zero. You will be decked out in gloves, hood, mask, fins and weight belt. Some superlative ice formations lie below sea level, and snorkelling gives travellers the chance to see them. The ice appears bluer when submerged as seals and penguins streamline through the water, leaving a jet of bubbles in their wake. The plunge can also take place alongside land and over shipwreck sites. 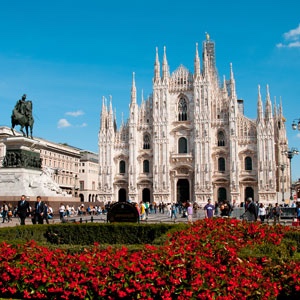 Five free things to do in Milan (1)